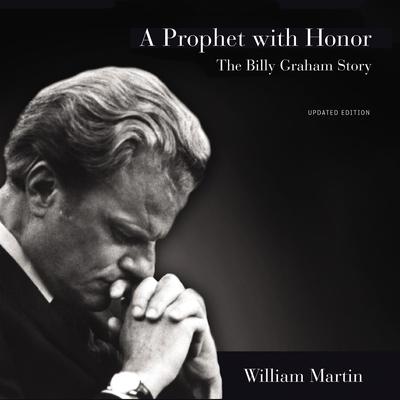 A Prophet with Honor: The Billy Graham Story

A Prophet with Honor celebrates one of the 20th century’s great luminaries. This engaging and comprehensive book will give both religious and secular readers a better understanding of the most successful evangelist in modern history, and the movement he led for over fifty years.

This book makes a vital contribution to the Billy Graham legacy and allows us to understand why his words, actions, and personality have endeared him to popes and preachers, kings and presidents, and millions of Christians in virtually every nation and culture around the world for more than a half-century.

A Prophet with Honor is the biography Graham himself requested and liked for its sympathetic but frank approach. In this carefully documented, eminently fair, and gracefully written account, William Martin raises and answers key questions about Graham’s character, contributions, and influence on the world religious scene. Tracing Graham’s life and ministry from his rural and religious roots in North Carolina to his place as the elder statesman of American evangelicalism, tracing both his triumphs and his tribulations, Martin shows the multidimensional character of the man who has become one of the most admired persons in the world. This engaging and comprehensive book offers a detailed understanding of the most successful evangelist in modern history, and the movement he led for over 50 years.

“An immense and appealing study of how Billy Graham became the ‘world’s most influential Christian leader,’ and how early America virtually became a Christian nation.” —Publishers Weekly

William Martin, the New York Times bestselling author of ten novels, is best known for his historical fiction, which has chronicled the lives of the great and the anonymous in American history while bringing to life legendary American locations, from Cape Cod to Annapolis to the City of Dreams. His first novel, Back Bay, introduced Boston treasure hunter Peter Fallon, who is still tracking artifacts across the landscape of our national imagination. He has also written an award-winning PBS documentary and one of the cheesiest horror movies ever made. Nevertheless, he was the recipient of the 2005 New England Book Award, given to “an author whose body of work stands as a significant contribution to the culture of the region.” There are now over three million copies of his books in print. He has three grown children and lives near Boston with his wife.