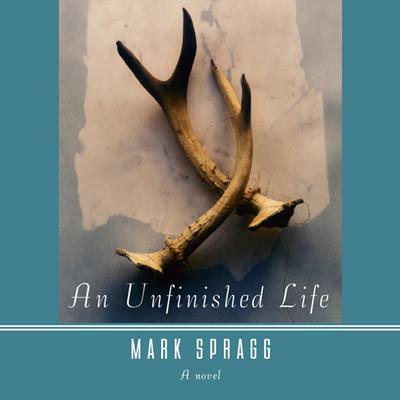 By Mark Spragg
Read by Tony Amendola and Judith Marx

An estranged daughter-in-law, a bitter father, and his suffering best friend are reunited for the sake of a child in this powerful tale of love, loss, and homecoming.

An estranged daughter-in-law, a bitter father, and his suffering best friend are reunited for the sake of a child in this powerful tale of love, loss, and homecoming.

“I can’t get more than a few pages into a novel unless the prose is good. In Mark Spragg’s An Unfinished Life, the writing is of considerable grace and beauty, plus there’s a compelling tale of the New West which at times is an uncomfortable page turner where you are standing on the sidelines rooting for your heartbreaking favorites.” —Jim Harrison
“Mark Spragg invents characters that are as richly drawn and lovingly rendered as the landscape in which he sets them down. An Unfinished Life is honest, engaged, deeply satisfying, and full of an uncanny grace that resides both in the beauty of the language and in these valuable lives.” —Pam Houston
“An Unfinished Life has dysfunction and menace and clipped, big-sky dialogue that’s as spare as Cormac McCarthy’s work but with a warmer patina. The carefully placed story hides surprising flashes of humor inside telling detail.” —USA Today
“Spragg, with consummate skill, uses people and places we don’t know to teach us something about ourselves. He explores human bonds, the difficulty of core change, and ultimately the need for forgiveness if a person is to be emotionally whole…An Unfinished Life is a deft contemplation of completion, of change, and of coming home.” —Denver Post
“Intensely human, gently probing the longing for family and the inescapable grip of the past. Swiftly shifting perspectives lend the novel a pleasing dynamism.” —Christian Science Monitor
“Rich with ancillary characters worked into his elaborate plots…When all the scattered elements of the story coalesce in strange and wondrous ways, so logical yet so unexpected, we are tempted to use a western idiom and state that Mark Spragg has put his brand on realistic Western novels in our time.” —St. Louis Post-Dispatch
“One of those once-in-a-blue-moon type novels that takes convention and stands it on its head…Filled with often poetic meditations about the love we hold for those who have died—what sort of role their memories play in our lives—and the importance of laying the past to rest while moving into the future.” —St. Petersburg Times
“The tension lies in the interior life Spragg creates for his characters. They are believably raw and wounded. And, above all, redeemable.” —New York Daily News
“Spragg writes in the man’s man literary school of Hemingway and Tom McGuane, where valor, brevity, and minor epiphanies still count for something, yet An Unfinished Life’s strength lies in its characters. It’s best one is the irrepressible little girl, Griff, barely beating out the two old coots, bitter Einar and handicapped Mitch, who talk with winning honesty while struggling through their ablutions and medical ministrations…An Unfinished Life makes you yearn for more of these characters and their prescient talk.” —Oregonian
“Ever since I became the books editor at the Kansas City Star in March 2000, folks have been asking me to recommend a reading experience as clean and sharp as Kent Haruf’s Plainsong…Finally, I have an answer. His name is Mark Spragg, his new novel is An Unfinished Life.” —John Mark Eberhart, Kansas City Star

Mark Spragg is the author of Where Rivers Change Direction, a memoir that won the Mountains & Plains Booksellers Award, and the novels The Fruit of Stone and An Unfinished Life, which was chosen by the Rocky Mountain News as the Best Book of 2004. All three were top-ten Book Sense selections. He lives with his wife in Wyoming.