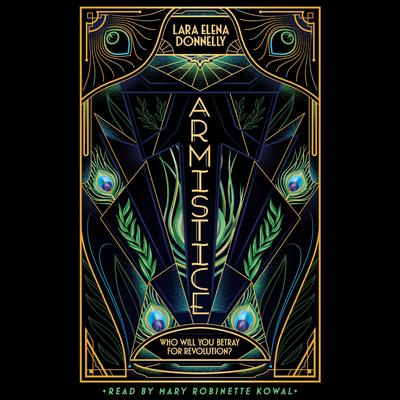 Armistice: Book 2 in the Amberlough Dossier

Armistice returns listeners to Lara Elena Donnelly’s ravishing 1930s Art Deco-tinged fantasy world of Amberlough with a decadent, tumultuous mixture of sex, politics, and spies “A hefty novel full of fascinating characters exploring oversized topics such as sexuality, music, culture, fascism, nationalism, class wars, revolution and love.” —Shelf Awareness In a tropical country where shadowy political affairs lurk behind-the-scenes of its glamorous film industry, three people maneuver inside a high stakes game of statecraft and espionage: Lillian, a reluctant diplomat serving a fascist nation, Aristide, an expatriate film director running from lost love and a criminal past, and Cordelia, a former cabaret stripper turned legendary revolutionary. Each one harbors dangerous knowledge that can upturn a nation. When their fates collide, machinations are put into play, unexpected alliances are built, and long-held secrets are exposed. All is barreling towards an international revolt...and only the wiliest ones will be prepared for what comes next. Praise for Amberlough: “James Bond by way of Oscar Wilde.”—Holly Black “Astonishing!” —World Fantasy Award-winning author Ellen Kushner “Beautiful, all too real, and full of pain. Read it. It will change you.” —Hugo Award-winning author Mary Robinette Kowal

In a tropical country where shadowy political affairs lurk behind-the-scenes of its glamorous film industry, three people maneuver inside a high stakes game of statecraft and espionage:

Aristide, an expatriate film director running from lost love and a criminal past,

Each one harbors dangerous knowledge that can upturn a nation. When their fates collide, machinations are put into play, unexpected alliances are built, and long-held secrets are exposed. All is barreling towards an international revolt...and only the wiliest ones will be prepared for what comes next.

“Beautiful, all too real, and full of pain. Read it. It will change you.” —Hugo Award-winning author Mary Robinette Kowal

Amberlough offers a sharp, lush, sensual espionage Cabaret, a Weimar world of lovers, criminals and spies all floating toward the fire. —Max Gladstone, LAMBDA Literary Award finalist
This is the book we need right now. Amberlough is a gorgeous, crucial reminder that even when the Fascists take over, people will fight back - no matter how flawed or frightened or damaged they might be, or how much they risk by doing so. —Sam J. Miller, finalist for the Nebula, World Fantasy, and Theodore Sturgeon Awards and winner of the Shirley Jackson Award
A peach softens and grows sweeter until it reaches a fragile state, lasting only about six hours, during which it's actually better than perfect--and then it goes off, it's gone, it's through. In Amberlough Donnelly takes us to a city and culture just tipping from this pluperfect moment. What a rich and melancholy book; so tragic, so gay! —Kai Ashante Wilson, author of Sorcerer of the Wildeeps and the Nebula & World Fantasy finalist for "The Devil in America
It’s a terrific novel. Very Evelyn Waugh meets The Sandbaggers. —John Chu, Hugo-award winning author
Intrigue and passions intertwine in Amberlough – A city on the edge of political upheaval, glittering with decadence and riddled with spies! Be careful or you too will be lost in the whirl of the kind of glamour familiar in 1930s Shanghai or Weimar-era Berlin. Donnelley's debut is powerfully seductive and wrenching. —Fran Wilde, author of Updraft
A glittering cabaret of a novel, with show-stopping language on every page. —Lev AC Rosen, author of Depth
If you put David Bowie, China Mieville, and Shakespeare in Love into a blender, you might get something as rich and frothy as Amberlough. An intricate tale of society where nothing is as it seems, and where the political is all-too-personal. —Cecilia Tan, author of The Struck by Lightning series
Weirdly elegant, wholly engaging, Donnelly's Amberlough is a richly visualized and genuinely fascinating novel. I couldn't put it down. —Josh Lanyon, author of the Adrien English Mysteries, and USA Book News Award for GLBT Fiction and the Eppie Award winner
"Amberlough is the stiletto-sharp tale of an intelligence agent caught between corrupt handlers, a rising fascist regime, and his doomed passion for the notorious star of a sizzling underworld nightclub. Sexy and suspenseful, with characters who play for keeps, Donnelly's debut novel mixes secrets, spying, and outlawed love like a perfectly made cocktail... one that seduces before hitting you with an unforgettable kick. —A.M. Dellamonica, LAMBDA Literary Award finalist for Child of a Hidden Sea
Lust and betrayal, intrigue and treachery, feints within feints within feints—Amberlough will keep readers up late into the night. I look forward to more adventures from Lara Elena Donnelly. —D.B. Jackson, author of the Thieftaker Chronicles
Sparkling with slang, full of riotous characters, and dripping with intrigue, Amberlough is a dazzling romp through a tumultuous, ravishing world. —Robert Jackson Bennett, winner of the Shirley Jackson Award and the Edgar Award
An astonishing first novel! —World Fantasy Award-winning author Ellen Kushner
James Bond by way of Oscar Wilde. — Holly Black
"[Mary Robinette] Kowal delivers a stunning performance...Her powerhouse performance will leave listeners eager for the final installment. —AudioFile, Earphones Award Winner
“Mary Robinette Kowal narrates an enthralling historical fantasy…[and] delivers a stunning performance. While the focus is narrower than the first book’s, the cast of characters is just as large, and Kowal creates fully realized personalities for all of them, no matter how brief their appearance. Glamorous film stars, wily politicians, anxious conspirators, and desperate lovers all need to survive, regardless of the cost to anyone else—and Kowal makes them believable. Her powerhouse performance will leave listeners eager for the final installment. Winner of the AudioFile Earphones Award.” —AudioFile
Donnelly blends romance and tragedy, evoking gilded-age glamour and the thrill of a spy adventure, in this impressive debut. As heartbreaking as it is satisfying. —Publishers Weekly, starred review
Donnelly’s striking debut brings a complex world of politics, espionage, and cabaret life to full vision. The emotional journeys of the characters as they struggle to survive in a society under siege by dark forces will strike a chord with readers as they race to the story’s conclusion. —Library Journal, starred review, Debut of the Month
Amberlough grabbed me from the first page. It is beautiful, all too real, and full of pain. Read it. It will change you. —Hugo Award-winning author Mary Robinette Kowal
A tightly woven and diverse cast of spies, criminals, cabaret bohemians, and lovers struggles to save what matters to each of them against a tide of rising fascism and violence in Donnelly's debut novel, set in a vaguely 1920s milieu….A sense of inevitable loss and futility permeates this rich drama. The fascists may never be defeated but only escaped—if the characters are willing to abandon the people they love. That dilemma will haunt them, as it haunts the reader. —Kirkus Reviews
“Donnelly’s use of language, setting, and descriptions all serve to evoke a smoky, lustrous Art Deco atmosphere reminiscent of a 1930s theatrical production. Offer it to adventurous le Carré fans: readers in search of espionage and political intrigue—with a dash of romance—against a distinctive backdrop.” —Booklist
“Donnelly has successfully built upon her intricate, lush world of passionate spies and turncoats, and each character leaps off the page in this satisfying novel that succeeds on both grand an intimate scales.” —Publishers Weekly (starred review)
“Donnelly returns readers to the world of Amberlough in this sequel…[for] readers who enjoy luxuriating in the book’s rich prose, sharp dialogue, and detailed interpersonal histories.” —Kirkus Reviews

Lara Elena Donnelly is an author and graduate of the Alpha and Clarion writing workshops. Her fiction won the Dell Magazine Award for Undergraduate Excellence in Science Fiction and Fantasy, and she has been published in Icarus, Strange Horizons, Grim Corps, and Mythic Delirium.