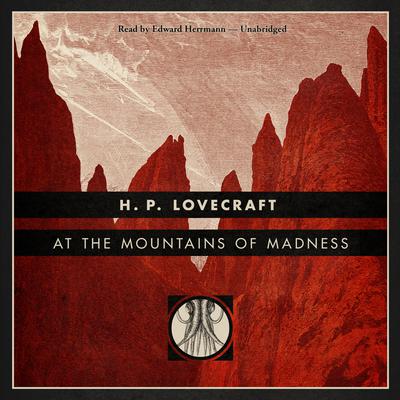 At the Mountains of Madness

The only audio edition of At the Mountains of Madness authorized by the H. P. Lovecraft Estate! A master of terror and nightmarish visions, H.P. Lovecraft solidified his place at the top of the horror genre with thismacabre supernatural tale. When a geologist leads an expedition to the Antarcticplateau, his aim is to find rock and plant specimens from deep within thecontinent. The barren landscape offers no evidence of any life-form—until theystumble upon the ruins of a lost civilization. Strange fossils of creaturesunknown to man lead the team deeper, where they find carved stones dating backmillions of years. But it is their discovery of the terrifying city of the OldOnes that leads them to an encounter with an untold menace. Deliberately told andincreasingly chilling, At the Mountainsof Madness is a must-have for every fan of classic terror.

The only audio edition of At the Mountains of Madness authorized by the H. P. Lovecraft Estate!

A master of terror and nightmarish visions, H.P. Lovecraft solidified his place at the top of the horror genre with thismacabre supernatural tale.

When a geologist leads an expedition to the Antarcticplateau, his aim is to find rock and plant specimens from deep within thecontinent. The barren landscape offers no evidence of any life-form—until theystumble upon the ruins of a lost civilization. Strange fossils of creaturesunknown to man lead the team deeper, where they find carved stones dating backmillions of years. But it is their discovery of the terrifying city of the OldOnes that leads them to an encounter with an untold menace.

Deliberately told andincreasingly chilling, At the Mountainsof Madness is a must-have for every fan of classic terror.

“There is a melancholy, operatic grandeur in Lovecraft’s most passionate work, like At the Mountains of Madness; a curious elegiac poetry of unspeakable loss, of adolescent despair and an existential loneliness so pervasive that it lingers in the reader’s memory, like a dream, long after the rudiments of Lovecraftian plot have faded.” —Joyce Carol Oates
“One of the greatest short novels in American literature and a key text in my own understanding of what that literature can do.” —Michael Chabon, New York Times bestselling author
“Lovecraft’s fiction is one of the cornerstones of modern horror.” —Clive Barker
“At the Mountains of Madness ranks high among the horror stories of the English language.” —Time
“Lovecraft’s At the Mountain of Madness opens with a newspaper announcement of a voyage to Antarctica…From there, the book launches into the story of Dyer’s own, earlier expedition to the Antarctic wasteland, one that culminated in murder and horror in the aforementioned mountains. Lovecraft was a master of writing about indescribable horrors whose visages violate the laws of nature in unsettling ways.” —Publishers Weekly
“With its atypically epic scope and clues to unraveling the Cthulhu mythos, it’s no wonder this story inspires the utmost devotion of Lovecraft fans.” —Booklist

"Such things did not happen in any normal world"

The disturbing implication of H. P. Lovecraft's novella At the Mountains of Madness (1931/36) is, of course, that our world is abnormal. From its great opening line ("I am forced into speech because men of science have refused to follow my advice without knowing why") to its closing shrieks of "Tekeli-li!" Lovecraft's story powerfully explores existential horror marked by the following:

The novella is the attempt by Dyer, a professor of geology at Mistaktonic University, to dissuade future scientific expeditions to Antarctica by telling what really happened to the disastrous one he led there in 1930. Dyer begins with practical details about supplies, personnel, and goals, scientific facts about longitude, latitude, temperature, and geology, and generally benign poetic impressions: "Distant mountains floated in the sky as enchanted cities, and often the whole white world would dissolve into a gold, silver, and scarlet land of Dunsanian dreams and adventurous expectancy under the magic of the low midnight sun." However, after his party reaches "the great unknown continent, and its cryptic world of frozen death," things start getting creepy: "On the barren shore, and on the lofty ice barrier in the background, myriads of grotesque penguins squawked and flapped their fins." And when Lake, a Professor of biology, finds a fossil footprint of some advanced life form from a period of earth's history when no advanced life forms existed and becomes obsessed with finding more, things become horribly strange.

Lovecraft's writing may at times strike one as overwrought, with absurd names like Yog-Sothoth, over-used words like mad/ness (34 times in this novella), horror/s (31), strange/ness/ly (29), primal (24), and nameless (21), and plenty of excess verbiage. And those bas-reliefs are too conveniently comprehensible. Nevertheless, if you get into his rhythm, Lovecraft builds a disturbing intensity as Dyer provides more details, leading us through a series of gateways into the ineffable alien past of earth. I found myself writing down whole passages, amused by their outré quality and awed by their rhythm and imagery. At the Mountains of Madness is an excellent story because it builds terror through gradual revelation, so that, though we guess much of what's going on much earlier than Dyer tells us, the point is that he has to nerve himself up to be able to say what he has to say. It's difficult for him. He doesn't want to inflict spiritual torment on humanity and doesn't want to relive his own Rubicon crossing into the madness lurking in the inner reality of life and the world, which "marked my loss, at the age of fifty-four, of all that peace and balance which the normal mind possesses through its accustomed conception of external nature and nature's laws." If you stay patient and journey with him through his past expedition, you may experience, if not the same hair-graying terror that Lovecraft is trying to evoke, a compellingly beautiful, disturbing, and strange experience: science fiction horror sublime. (Only Lovecraft could make into figures of horror that comment on the human condition six-foot tall, albino, eyeless penguins living in tunnels leading to the abyss.)

If you become irritated when characters in horror movies enter places they should know better than to enter, Dyer and Danforth may drive you crazy, but they do what they do because of curiosity, and this novella is largely about that human trait: "Half paralyzed with terror though we were, there was nevertheless fanned within us a blazing flame of awe and curiosity which triumphed in the end." Ah, Dyer should know that the more he tries to convince scientists not to explore Antarctica by telling them of his experiences, the more they will flock there.

Edward Hermmann's clarity, restraint, gravitas, and deep, rich voice render Lovecraft's most outlandish names, exotic terms, frustrating delays, and pet words convincing. In a brilliant touch, his moment of greatest emotion comes when Dyer feels some cross-species sympathy: "Poor Old Ones! Scientists to the last--what had they done that we would not have done in their place? . . . Radiates, vegetables, monstrosities, star spawn--whatever they had been, they were men!"

Lovecraft is often described as a horror writer. I do not think that is completely true. He wrote in more than one genre and At The Mountains of Madness is much closer to science fiction than it is horror.

Just FYI, John Carpenter's "The Thing" is actually a remake of the 1951 movie, "The Thing From Another World." They're both based on a 1938 novella, "Who Goes There?" by John W. Campbell.

Right out of the gates it was very clear that this book was originally written many many years ago, published in 1936 to be exact. The words and terms used are “old fashioned” but that almost added to the anticipation of what was coming or the tension and suspense it created. At the Mountains of Madness takes place in the Antarctic following a group of explorers, the reason they were there escapes me. I couldn’t help being somewhat reminded of my all time favorite horror movies, the original from 1982, John Carpenter’s The Thing. Now both in this book and in the movie they are in the arctic/antarctic exploring, not much happens until they make an terrifying and incredible discovery. This book goes even further because after the first discovery they continue exploring and find something even more frightening. I did not get scared but I was certainly all ears due to the extreme suspense Lovecraft created and was difficult to tear away when I needed to. At the Mountains of Madness is truly a timeless exquisite tale that will live on in that creepy corner or my soul.

Edward Herrmann was a perfect choice for the narration of this audiobook. His very posh and polished voice added so much to the “old English” contained in this tale. While I would have liked more dynamism from Hermann, more emotional variance, tonal fluctuation, you know everything that I expect from a really great narrator, but even without all of this his narration was very very good.

H. P. Lovecraft (1890–1937) was an American author who achieved posthumous fame through his influential works of horror fiction. Virtually unknown and only published in pulp magazines before he died in poverty, he is now regarded as one of the most significant twentieth-century authors in his genre. He was born in Providence, Rhode Island, where he lived most of his life. His relatively small corpus of work consists of three short novels and about sixty short stories.