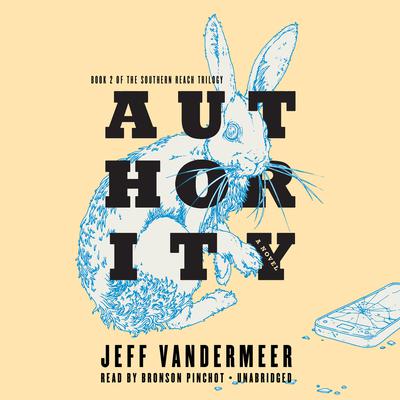 The bone-chilling, hair-raising second installment of the Southern Reach Trilogy For thirty years, a secret agency called the Southern Reach has monitored expeditions into Area X—a remote and lush terrain mysteriously sequestered from civilization. After the twelfth expedition, the Southern Reach is in disarray, and John Rodriguez (a.k.a. "Control") is the team's newly appointed head. From a series of interrogations, a cache of hidden notes, and more than two hundred hours of profoundly troubling video footage, the secrets of Area X begin to reveal themselves—and what they expose pushes Control to confront disturbing truths about both himself and the agency he's promised to serve.

A Publishers Weekly Pick of the Week, May 2014

The bone-chilling, hair-raising second installment of the Southern Reach Trilogy

For thirty years, a secret agency called the Southern Reach has monitored expeditions into Area X—a remote and lush terrain mysteriously sequestered from civilization. After the twelfth expedition, the Southern Reach is in disarray, and John Rodriguez (a.k.a. "Control") is the team's newly appointed head. From a series of interrogations, a cache of hidden notes, and more than two hundred hours of profoundly troubling video footage, the secrets of Area X begin to reveal themselves—and what they expose pushes Control to confront disturbing truths about both himself and the agency he's promised to serve.

“Chilling.” —New York Times
“The second volume of VanderMeer’s trilogy…In this sequel, VanderMeer supplements his evocative descriptions of the unnatural Area X with the shadowy, dusty, seemingly half-forgotten offices in which Control spends his time…The book strengthens and develops the narrative arc while remaining fully coherent on its own, revealing more and more secrets about Area X all the while. VanderMeer’s masterful command of the plot, his cast of characters, and the increasingly desperate situation will leave the reader desperate for the final volume in the trilogy.” —Publishers Weekly (starred review)
“In the second installment of the Southern Reach trilogy, Vandermeer continues to unravel the mysteries surrounding Area X, an isolated dystopia where unknown powers either disappear its inhabitants or return them to humanity brainwashed and useless…Compelling.” —Booklist
“Authority isn’t a book that just picks up where the last one left off. Instead, it’s packed full of new pleasures, not only new characters and settings but whole new kinds of writing.” —Robin Sloan, author of Mr. Penumbra’s 24-Hour Bookstore
“There’s something Poe-like in this tightening, increasingly paranoid focus. But where Poe kept his most vicious blows relatively oblique, VanderMeer drives them deep—albeit in a corkscrewing way that is no less cruel and exquisite. There’s a slower buildup of tension in this book than the first, possibly because it’s almost twice as long. The payoff is absolutely worth the patience.” —New York Times Book Review, Editor’s Choice

The second in the series, I was ready for more eerie field notes, but this book was structured differently and really steps up the storytelling. Still totally chilling and bizarre, but this time you hear directly from the characters who are trying to unravel the mystery of Area X which I found a lot more engaging. For every piece of backstory revealed, there’s a new mystery presented and the story falls farther in seeming madness while still very much marching toward some kind of climactic ending. There were a few moments that were positively spine-tingling. The narration was very well done and fit the story perfectly. I’m hooked now and have to see how this crazy series ends!

I really enjoyed the first book in this trilogy, Annihilation, but Authority really kicks it up a notch. And the narration is excellent. The narrator of the first book was decent, but there was just something missing. But there's nothing missing here. Can't wait for the final installment!

Another surreal expedition into uncanny terrain

In Authority, VanderMeer pivots from the first-person journal of the unnamed biologist (read by Carolyn McCormick) which introduced "Area X" in Annihilation to an exploration of a different, though as uncanny and surreal, terrain: the organization which sent her into "Area X" in the first place, the Southern Reach itself. We do see the biologist often in Authority, but it is through the eyes of agent/operative John Rodriguez (aka "Control"), newly appointed acting director of the Southern Reach, interrogating her after her reappearance along with the other survivors of the expedition depicted in Annihilation. Control finds offices in decay and disarray, a shrinking staff divided into factions loyal to the previous director and "lifers" who are in it for the weird science and/or have nowhere else, really, to go. Throughout, Control reports his progress and findings -- often couched -- to The Voice, a shrouded, mysterious figure known only as a (digitally masked) voice on the phone. The cast of characters here each have layers and motivations -- usually inscrutable -- of their own: Grace, the assistant director who believes the previous director is still alive; Cheney, the head of the science department; and fellow scientist Whitby, who frequently acts as Control's guide. I found the Southern Reach in Authority to act as both a metaphor for the many fragments of our own labyrinthine consciousnesses while also a rejection of such abstraction or disaggregation; an organization gone feral after decades of attempting to understand the incomprehensible, having stared too long into the abyss. Meanwhile Control's expedition into its hierarchies and storage rooms and film archives plays with and against reader expectations: again we must question the reliability of our narrator, of the purpose and use of evidence and rationality in the context of such a narrative in the first place. VanderMeer creates mystery, unease, and an escalation of the compulsion behind this series: what is "Area X"?

Narrated by Bronson Pinchot for Blackstone Audio, the audiobook is, again, fantastic, cementing my feeling that Pinchot is one of the best narrators in the business (from non-fiction like How to Build an Android: The True Story of Philip K. Dick’s Robotic Resurrection to the wide-ranging accents of Tim Powers’ On Stranger Tides and Last Call, to Ray Bradbury’s The Halloween Tree). Pinchot's characterizations of Grace (annoyed, Southern, mistrustful of Control), Cheney (bombastic, seemingly oblivious), Whitby (hesitant, waffling, couching), linguist Jessica Hsyu, and indeed "Ghost Bird", the biologist from Annihilation are all spot-on. On the latter it's really, really interesting to get a third-person perspective on the biologist, who remains a bit flat in affect but with something else waiting underneath. Pinchot also does something a bit subtle in the first chapters: he starts voicing Control's dialogue with a soft Hispanic accent, which slowly disappears until being read with a neutral accent. Is his identity so quickly swallowed up by the Southern Reach? It's just one more of the layers-within-layers that draws us ever deeper in. As the sense of unease, of wrongness, of looking where we should not be looking grows (to me drawing connections between the Southern Reach of Authority and the Coburn National Laboratory and Observatory in Robert Jackson Bennett's American Elsewhere), Pinchot's narration matches it, tension for tension, finally bursting apart like a puffball mushroom and letting the ideas aloft like spores across the terroir of the transformed landscapes, closing after a novel with a more thriller pacing of half-hour chapters with an extended last chapter three times that length which is impossible to put down. In the end, Authority like Annihilation stands alone; one can read the other without having read (or having to read) the other; reading Authority without Annihilation may if anything add to the mysteriousness at hand, though of course each offers additional layers of context for the other. Also: both novels offer by their final pages a certain closure to dramatic arcs of decision and action, while of course inviting (if not compelling!) further expeditions.

Jeff VanderMeer is an award-winning novelist and editor. His fiction has appeared in the Library of America’s American Fantastic Tales and in multiple anthologies. His recent books have made the year’s best books lists of Publishers Weekly, San Francisco Chronicle, and Amazon.com. Annihilation won the Nebula Award and the Shirley Jackson Award and was adapted into a Paramount Pictures movie by Alex Garland, starring Natalie Portman and Jennifer Jason Leigh. His other awards include World Fantasy Awards, Locus Award, Shirley Jackson Award, and the British Science Fiction Association award for nonfiction, France’s Le Cafard Cosmique, and Finland’s Tähtifantasia Award. He is the cofounder and assistant director of Shared Worlds, a unique fantasy and science fiction writing camp for teenagers.