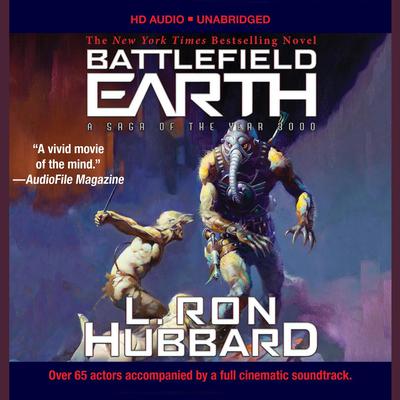 If you liked Dune, Atlantis Gene and Star Wars—you will love the book Battlefield Earth!

In the year A.D. 3000, Earth is a dystopian wasteland, plundered of its natural resources by alien conquerors known as Psychlos. Fewer than thirty-five thousand humans survive in a handful of communities scattered across the face of a post-apocalyptic Earth.

From the ashes of humanity rises a young hero, Jonnie Goodboy Tyler. Setting off on an initial quest to discover a hidden evil, Jonnie unlocks the mystery of humanity’s demise and unearths a crucial weakness in their oppressors. Spreading the seeds of revolt, Jonnie and a small band of survivors pit their quest for freedom in an all-out rebellion that erupts across the continents of Earth and the cosmic sprawl of the Psychlo empire.

For the fate of the Galaxy lies on the Battlefield of Earth.

“Battlefield Earth is a terrific story! The carefully underplayed comedy I found it delicious. A masterpiece.”—Robert A. Heinlein

“Pulse-pounding mile-a-minute sci-fi action adventure that does not stop. It is a masterpiece of popular adventure science fiction.”—Brandon Sanderson
“Space opera that hits the right notes. It's provocative, exhilarating and genuinely enjoyable.”—SCIFI.COM

“Like the Harry Potter series, its got concepts like good vs. evil, the noble savage and the hero’s journey—and people go crazy over it!”—Dr. David Powers, Educator

Unlike any other audiobook ever produced. A fully immersive experience, this unabridged audiobook features more than 65 actors including Grammy Award-winning audiobook producer and narrator Stefan Rudnicki.

This state-of-the-art audio engineering has created a wholly cinematic soundtrack with:

Written with a phenomenal burst of creative energy in a sustained eight-month period in 1980, and first published in October 1982, Battlefield Earth became a breakaway New York Times and international best seller, hailed as one of the classic science fiction novels.

“Over 1,000 pages of thrills, spills, vicious aliens, and noble humans.” —Neil Gaiman, #1 New York Times bestselling author
“Battlefield Earth is a terrific story! The carefully underplayed comedy I found delicious. A masterpiece.” —Robert A. Heinlein, New York Times bestselling author
“Think of the Star Wars sagas and Raiders of the Lost Ark, mix in the triumph of Rocky I, II, and III and you have captured the exuberance, style, and glory of Battlefield Earth.” —Baltimore Sun
“Battlefield Earth is more than pure science fiction, it’s pure gold.” —Barnes & Noble
“This has everything: suspense, pathos, politics, war, humor, diplomacy, and intergalactic finance.” —Publishers Weekly
“The futuristic tale, featuring aliens and humans fighting for survival, comes across as compelling and believable.” —Booklist
“A vivid movie of the mind!” —AudioFile
“The sheer scope of this production of the epic sci-fi adventure Battlefield Earth is breathtaking.” —Stefan Rudnicki, Grammy Award–winning audiobook narrator and producer
“A pulse-pounding mile-a-minute sci-fi action adventure that does not stop. It is a masterpiece of popular science fiction.” —Brandon Sanderson, author of The Way of Kings
“Non-stop and fast-paced. Every chapter has a big bang-up adventure.” —Kevin J. Anderson, author of The Dark Between the Stars
“The swashbuckling energy and wonder of Star Wars.” —Dave Wolverton, author of Star Wars: The Courtship of Princess Leia
“Battlefield Earth has the same exuberant pacing and action-loaded story as Star Wars.” —Roland J. Green, author of the Starcruiser Shenandoah series

A good book, but

I read this book many years ago and enjoyed it a lot. The audio version, not so much. The narration is excellent and I listened to six and a half hours before deciding that it moved too slow (I still had 40 hours to go). A big part of the problem was that they played "dramatic" music at every pause in the story or scene change and the music seemed to go on forever.

This audiobook changes everything, it is awesome listening

I am a big audiobook listener but the Battlefield audiobook definitely is a game changer, it puts you right in the actions. The characters are so real, the sound effects surround you. Someone said it is a "movie inside your mind" well that's what I got. I lost sleep listening to this. Highly recommended.

L. Ron Hubbard (1911–1986), with nineteen New York Times bestsellers and more than 230 million copies of his works in circulation, was among the most acclaimed and widely read authors of the twentieth century. As a leading light of American pulp fiction through the 1930s and 1940s, he was further among the most influential authors of the modern age. Indeed, from Ray Bradbury to Stephen King, there is scarcely a master of imaginative tales who has not paid tribute to him.