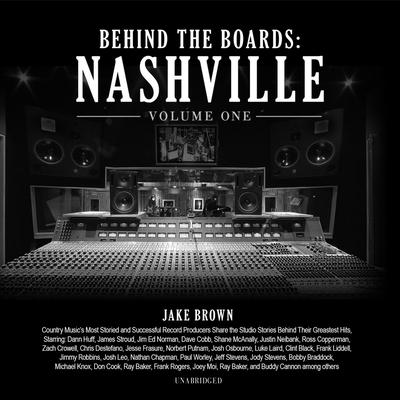 Behind the Boards: Nashville, Vol. 1: The Studio Stories Behind Country Music’s Greatest Hits

If you’re a County Music fan, you’ve seen glimpses perhaps of it on TV shows like Nashville and movies like Walk the Line, but never before have fans of music’s biggest-selling genre been invited inside the heart of the creative nerve centers where their favorite # 1 hits are brought to life, the recording studio! Inside the pages of Behind the Boards: Nashville, Country music fans for the first time ever are given a front-row seat inside Music Row’s most famous recording studios on tours narrated by the town’s biggest record producers. Volume 1 includes Dann Huff, Tony Brown, Michael Knox, Clint Black, James Stroud, Ross Copperman, Byron Gallimore, Josh Leo, Norbert Putnam, Jody Stevens, Frank Liddell, and Jesse Frasure!

“A new book Behind the Boards: Nashville by biographer Jake Brown pulls back the curtain on the Music Row hit-making machine and the producers who create the music. The book explores the in-depth relationships between artists and producers while revealing the compelling stories behind some of the biggest hits to come out of Music City.” —Music Row Magazine
“This book takes us on a journey behind the scenes of the studio as producer and artists work together to create the songs that become a deep part of our lives.” —Roughstock.com
“The latest project by author Jake Brown, invites readers inside for front row, first-hand conversations with 30 of Country music’s most successful and legendary record producers of the past 50 years.” —American Songwriter Magazine
“Author Jake Brown is a prolific sharer of behind-the-scenes stories. For his 50th book, Behind the Boards: Nashville, he goes into the control room with 30 of country music’s top producers to share intimate stories behind the hits.” —Parade Magazine
“A new book by music biographer Jake Brown takes fans into the recording studio to tell rarely heard stories of their favorite hits. Collecting thoughts from thirty of Nashville’s top producers like Dann Huff, Shane McAnally, Michael Knox, Joey Moi, Buddy Cannon…there’s much more to discover in Behind the Boards: Nashville.” —SoundsLikeNashville.com
“A skilled writer and music biographer, Brown brings the reader into the studio by seamlessly oscillating between narration and interview, weaving together the history and context surrounding these classic recordings with the voices of those who were there, behind the boards. Behind The Boards II is a fascinating collection of tales of the technical and human elements behind some of the greatest music of all time.” —Mix magazine
“A new Jake Brown book, Behind the Boards: Nashville…goes deep.” —Country Music Television

Jake Brown is an award-winning Nashville based music biographer of over 40 books including authorized collaborations including Joe Satriani, Heart, Moorhead, 2Pac, and author of the trademarked “In the Studio” book series (Rick Rubin, ACDC), the Nashville Songwriter book series and others including Beyond the Beats, HIP HOP HITS and Behind the Boards.