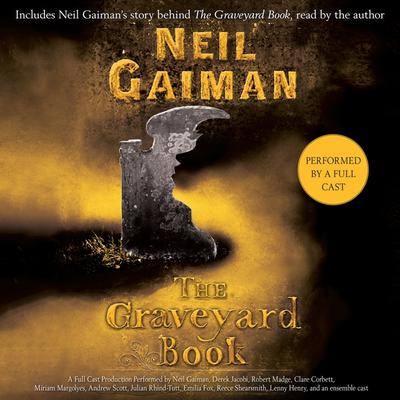 By Neil Gaiman
Performed by  a full cast

The original hardcover edition of a perennial favorite, The Graveyard Book by Neil Gaiman, which has sold more than one million copies and is the only novel to win both the Newbery Medal and the Carnegie Medal. Bod is an unusual boy who inhabits an unusual place—he's the only living resident of a graveyard. Raised from infancy by the ghosts, werewolves, and other cemetery denizens, Bod has learned the antiquated customs of his guardians' time as well as their ghostly teachings—such as the ability to Fade so mere mortals cannot see him. Can a boy raised by ghosts face the wonders and terrors of the worlds of both the living and the dead? The Graveyard Book is the winner of the Newbery Medal, the Carnegie Medal, the Hugo Award for best novel, the Locus Award for Young Adult novel, the American Bookseller Association’s “Best Indie Young Adult Buzz Book,” a Horn Book Honor, and Audio Book of the Year.

Winner of the 2015 Audie Award for Distinguished Achievement in Production

Winner of the 2015 Audie Award for Best Multivoiced Performance

Winner of the 2010 Carnegie Medal for Literature

Winner of the 2009 Newbery Medal

Winner of the 2009 Hugo Award for Best Novel

Winner of the 2009 Locus Award for Best Young Adult Novel

Winner of the 2009 Indies Choice Book Award: Young Adult Book of the Year

A 2008 ALA Best Book for Young Adults

One of Kirkus Reviews’ Best Books for Children in 2008

A 2008 Booklist Editors’ Choice for Youth

Shortlisted for the 2009 British Fantasy Award for Best Novel

An AudioFile Best Audiobook of the Year for 2014

The original hardcover edition of a perennial favorite, The Graveyard Book by Neil Gaiman, which has sold more than one million copies and is the only novel to win both the Newbery Medal and the Carnegie Medal.

Bod is an unusual boy who inhabits an unusual place—he's the only living resident of a graveyard. Raised from infancy by the ghosts, werewolves, and other cemetery denizens, Bod has learned the antiquated customs of his guardians' time as well as their ghostly teachings—such as the ability to Fade so mere mortals cannot see him.

Can a boy raised by ghosts face the wonders and terrors of the worlds of both the living and the dead?

“It takes a graveyard to raise a child. My favorite thing about this book was watching Bod grow up in his fine crumbly graveyard with his dead and living friends. The Graveyard Book is another surprising and terrific book from Neil Gaiman.” —Audrey Niffenegger, New York Times bestselling author of The Time Traveler’s Wife
“The Graveyard Book is everything everyone loves about Neil Gaiman, only multiplied many times over, a novel that showcases his effortless feel for narrative, his flawless instincts for suspense, and above all, his dark, almost silky sense of humor.” —Joe Hill, New York Times bestselling author of Heart–Shaped Box
“After finishing The Graveyard Book, I had only one thought—hope there’s more. I want to see more of the adventures of Nobody Owens, and there is no higher praise for a book.” —Laurell K. Hamilton, New York Times bestselling author of the Anita Blake: Vampire Hunter novels
“The Graveyard Book, by turns exciting and witty, sinister and tender, shows Gaiman at the top of his form. In this novel of wonder, Neil Gaiman follows in the footsteps of long-ago storytellers, weaving a tale of unforgettable enchantment.” —New York Times Book Review
“Like a bite of dark Halloween chocolate, this novel proves rich, bittersweet, and very satisfying.” —Washington Post
“As narrator, Derek Jacobi does the heavy lifting in this full-cast recording, with other cast members voicing characters’ dialogue. It all fits together seamlessly as listeners are swept, entranced and intrigued, into the magical story. Robert Madge sounds perfectly wide-eyed, curious, and boyish voicing Bod, the boy raised in a graveyard by ghosts. Miriam Margolyes’ considerable talents shine as Bod’s nurturing adoptive mother, Mrs. Owens, and as his teacher, Miss Lupescu. And Julian Rhind-Tutt is deliciously grave as Silas, Bod’s mysterious guardian. The cast is uniformly excellent, giving broad or subtle performances as appropriate, and the overall effect is to enhance the sense of the graveyard as a community, and of the dangers lurking outside it.” —AudioFile
“A rich, surprising, and sometimes disturbing tale of dreams, ghouls, murderers, trickery, and family.” —School Library Journal
“Wistful, witty, wise—and creepy. This needs to be read by anyone who is or has ever been a child.” —Kirkus Reviews (starred review)
“Lucid, evocative prose and dark fairy-tale motifs imbue the story with a dreamlike quality…This ghost-story-cum-coming-of-age-novel as readable as it is accomplished.” —Horn Book (starred review)
“Derek Jacobi leads an outstanding full cast in this new production of the 2009 Newbery Medal winner. Effective musical transitions build suspense as Bod/Nobody grows up among the benevolent graveyard inhabitants. Superb vocal interpretations of the many protagonists capture the elements of friendship, family, and murder. Gaiman concludes with a description of the story’s origin.” —School Library Journal (audio review)
“The Graveyard Book is sure to become a book to last the ages.” —Bookmarks
“The Graveyard Book manages the remarkable feat of playing delightful jazz riffs on Kipling’s classic Jungle Books. One might call this book a small jewel, but in fact it’s much bigger within than it looks from the outside.” —Peter S. Beagle, author of The Last Unicorn
“The Graveyard Book is endlessly inventive, masterfully told and, like Bod himself, too clever to fit into only one place. This is a book for everyone. You will love it to death.” —Holly Black, co-author of The Spiderwick Chronicles
“This is, quite frankly, the best book Neil Gaiman has ever written. How he has managed to combine fascinating, friendly, frightening, and fearsome in one fantasy I shall never know, but he has pulled it off magnificently—perfect for Halloween and any other time of the year.” —Diana Wynne Jones, author of The Chronicles of Chrestomanci
“I wish my younger self could have had the opportunity to read and re-read this wonderful book, and my older self wishes that I had written it.” —Garth Nix, author of The Abhorsen Trilogy

Fine performances by the voice actors

The cast of voice actors is super here. Its a wonderful modern and somewhat eccentric story of a boy raised by a myriad of characters all dead, most buried in the graveyard near his birth home where his family is murdered and boy comes to grows up with the freedom of the graveyard. The characters come from times spanning the centuries. Good fun with a shady subplot about his families murders. 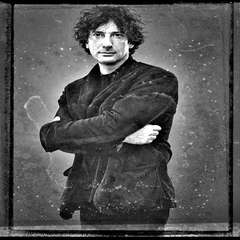