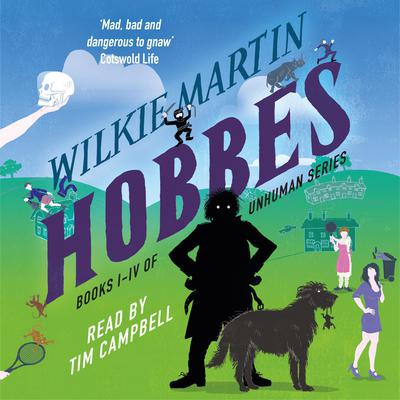 Enjoy a journey through the first four unhuman tales in this comedy cozy mystery fantasy omnibus:

I - Inspector Hobbes and the Blood

Inspector Hobbes, a monstrous police detective, investigates grave, ghoulish goings-on. A mad pseudo vampire with the dagger of Vlad Tepes is behind robbery, and murder. It is a funny tale with a troll, human sacrifice, blood and great cooking.

Tim Campbell nominee for ABR Audiobook Listener Awards 2018 for narration of the Inspector Hobbes and the Blood audiobook.

II - Inspector Hobbes and the Curse

Andy becomes infatuated with a dangerously beautiful woman during Hobbes's investigations into sheep deaths and the mysterious disappearance of pheasants, which are apparently connected to a rash of big cat sightings; and something horrible seems to be lurking in the woods.

Unwelcome attention after foiling an armed robbery forces the Inspector away on holiday to the dangerous Blacker Mountains, where his accident-prone friend, Andy, stumbles across something shocking, before falling for an attractive widow.

IV - Inspector Hobbes and the Bones

Certain trouble lies ahead for Andy Caplet. Is the apparently charming young woman who attempts to seduce him merely setting him up for blackmail, or is something even more sinister afoot? Inspector Hobbes certainly believes so, and, though he's not the sort to worry, he is getting worried.

Tim Campbell Winner of Independent Audiobook Awards 2019 Fantasy and nominee for a VoiceArts Award 2018 for narration of the Inspector Hobbes and the Bones audiobook.