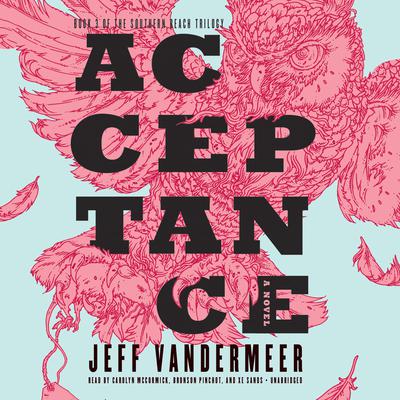 It is winter in Area X. A new team embarks across the border on a mission to find a member of a previous expedition who may have been left behind. As they press deeper into the unknown—navigating new terrain and new challenges—the threat to the outside world becomes only more daunting. In the final installment of the Southern Reach Trilogy, the mysteries of Area X may have been solved, but their consequences and implications are no less profound—or terrifying.

It is winter in Area X. A new team embarks across the border on a mission to find a member of a previous expedition who may have been left behind. As they press deeper into the unknown—navigating new terrain and new challenges—the threat to the outside world becomes only more daunting.

In the final installment of the Southern Reach Trilogy, the mysteries of Area X may have been solved, but their consequences and implications are no less profound—or terrifying.

“The concluding installment of the Southern Reach trilogy ends where the story began: in a cloud of hallucinatory mystery…This trilogy represents an interesting pivot for VanderMeer: Although sharing many of the same motifs—metamorphosis, unusual fungi, and other organic material, a pull toward the sea—it’s actually more restrained (if no less vivid) than the lush baroquerie of his earlier works. We leave knowing more about Area X than we started; we may not understand it any better, but we leave transformed, as do all travelers to that uncanny place.” —Kirkus Reviews (starred review)
“The concluding volume of VanderMeer’s Southern Reach trilogy brings each of the series’s narrative threads together for an enigmatic but satisfying conclusion…In many ways, this is the most mysterious and puzzling book of the three: VanderMeer employs multiple flashbacks and POVs, which contribute to a multifaceted, mutating portrait of Area X. The pacing of the narrative is slower, but the reader will want to move slowly so as not to miss any of the more subtle occurrences or psychological insights. By the time the book is finished, the reader knows that this trilogy is that rare thing—a set in which the whole is as great as the parts.” —Publishers Weekly
“The third volume in the Southern Reach trilogy takes us back to the region known as Area X…Easy answers are not on offer from VanderMeer, but he does give a sense of closure, and the three books together stand as a remarkable imaginative achievement. Displaying the dizzying skill with imagery and language that have been seen throughout the series, the author leaves readers with some answers, more questions, and an appreciation of the journey.” —Library Journal
“As the Southern Reach trilogy concludes, another exploratory team is sent into Area X—that raw, almost biologically primal region that revealed its secrets in Annihilation and Authority…A satisfying conclusion to this captivating trilogy.” —Booklist
“VanderMeer weaves together otherworldly tales of the supernatural and the half-human.” —Booklist (starred review) on the Southern Reach trilogy
“[A] wonderfully creepy blend of horror and science fiction…Speculative fiction at its most transfixing.” —Kirkus Reviews (starred review) on the Southern Reach trilogy

by Downpour.com 9/13/2017
Your concern about the audio quality has been reported. Thanks for your letting us know!

The final book in the trilogy – this series kept me intrigued throughout! Still very chilling and complex, this book introduces new characters and questions, and takes you into Area X itself. If the storytelling was stepped up from books 1 to 2, then book 3 is in a whole other category as it navigates between horror, drama, sci-fi, science, and dystopia. The narration was excellent with three different narrators hitting their characters perfectly as they blended flashbacks with the current plot and the massive range of emotions and reactions that entailed. While a story this complicated and expansive could never really give you every answer neatly at the end, the resolution is still somehow satisfying in its mystery. This is a totally unique series and definitely one I’d recommend for anyone looking for something out of the ordinary.

[Note: the following review contains material spoilers for the first two books in the series, but attempts to cover in detail only early events in Acceptance, with the primary spoilage being which narrators voice which characters, which also implies detailing which characters appear in the book.]

I expected Sands’ “Director” to blow me away, and it does, her voice full of texture and emotion, regret and frustration. The book opens with Sands as “The Director”, whom we learned in Authority was also the unnamed “psychologist” from Annihilation. VanderMeer’s use of second person in her chapters is genius — as an interview with Electric Literature highlights — making the emotional undercurrents punch even more — which, as in the first chapter we are experiencing her death on the beach below the lighthouse, shouting “Annihilation! Annihilation!” as the biologist approaches, is indeed quite an escalation. Ensuing chapters from her POV pick up much earlier, with events at The Southern Reach well prior to Annihilation, including some events we’ve seen referenced and reported on in the previous books as well as complex, unexpected connections made all the richer for having only seen them shallowly or through second-hand eyes.

I didn’t expect to be so drawn by the character of the lighthouse keeper, or that we’d be in his point of view at all. Pinchot later reprises his role as “Control” a.k.a. “John Rodriguez” from Authority as well, but from the first lines of “0001: The Lighthouse Keeper” Pinchot’s portrayal of Saul Evans is fantastic. Right away we are introduced to two members of the S&SB — the “Séance & Science Brigade” — and, through these chapters, we begin to get glimpses and glimmers of the origins of Area X. We also get to know Gloria, a grade-school-aged girl who plays on the rocks near the lighthouse, and the way Pinchot brings VanderMeer’s characterization of her direct, no-nonsense conversations with Saul to remarkable life is truly a delight.

I really didn’t expect either the “Ghost Bird” point of view or even more that these would be read by Pinchot instead of McCormick, who narrated the biologist’s journal that is Annihilation in its entirety. In Authority, “Ghost Bird” is presented as either the biologist herself, returned from Area X and hiding crucial information, or perhaps a copy. But as the audiobook for Acceptance continues the choice of using Pinchot is also revealed as inspired. When we last left Ghost Bird and Control, they were diving into a tide pool that was also, somehow, a new door into Area X. Now, emerged inside Area X, we follow their journey across its landscape, looking for answers.

And here is where Acceptance must, and does, earn its complexity of construction. At some level any answers in detail can be a disappointment when compared to the unknowable possibilities of the unanswered or even unanswerable. But when fleshed out and allowed to breathe, to grow organically, fractally through the text, like a frog sitting in a pot as it cooks, your comfort is all the more shattered for the illusion of answers which Acceptance offers and considers and discards, achieving a balance of explanation and mystery which makes this trilogy even more special. Annihilation was fantastic, concluding with perhaps infinitely more questions than answers, and yet ending in a way that evoked satisfaction and completeness. By continuing first into the halls of The Southern Reach in Authority and now back again into Area X with Acceptance the author risked spoiling that, in making the missteps that other stories have made, in tarnishing the achievement that Annihilation was and is. VanderMeer did not play it safe, and we’re all the more rewarded for it. From the first-person journal account of the biologist, to the close third person of “Control” and the spy novel themes of the second book, to exploding ever outward in scope and length and complexity, The Southern Reach Trilogy is an ambitious and unequivocal success, having traversed from solitary account through the transitional ground of investigation and, finally, a powerful ensemble cast rumination on acceptance itself.

Lastly, however, I must note that while the performances on the audiobook are fantastic, some audio re-take splices are noticeable here and there. Nothing to the point of true distraction, but at a level one doesn’t expect from a professionally-produced audiobook. Perhaps this is only an artifact of the Downpour.com digital release (downloaded Monday Sep 1 at 12:05 AM) and more care was taken during the CD mastering process.

Jeff VanderMeer is an award-winning novelist and editor. His fiction has appeared in the Library of America’s American Fantastic Tales and in multiple anthologies. His recent books have made the year’s best books lists of Publishers Weekly, San Francisco Chronicle, and Amazon.com. Annihilation won the Nebula Award and the Shirley Jackson Award and was adapted into a Paramount Pictures movie by Alex Garland, starring Natalie Portman and Jennifer Jason Leigh. His other awards include World Fantasy Awards, Locus Award, Shirley Jackson Award, and the British Science Fiction Association award for nonfiction, France’s Le Cafard Cosmique, and Finland’s Tähtifantasia Award. He is the cofounder and assistant director of Shared Worlds, a unique fantasy and science fiction writing camp for teenagers.