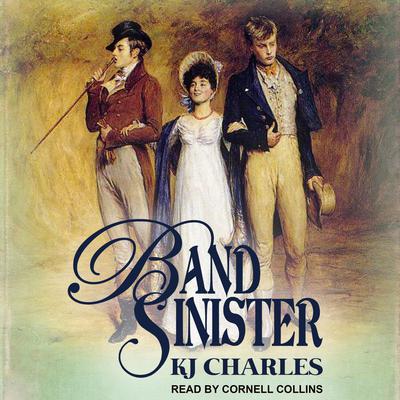 Guy Frisby and his sister Amanda live in rural seclusion after a family scandal. But when Amanda breaks her leg in a riding accident, she's forced to recuperate at Rookwood Hall, where Sir Philip is hosting the Murder.

Guy rushes to protect her, but the Murder aren't what he expects. They're educated, fascinating people, and the notorious Sir Philip turns out to be charming, kind—and dangerously attractive.

In this private space where anything goes, the longings Guy has stifled all his life are impossible to resist . . . and so is Philip. But all too soon the rural rumour mill threatens both Guy and Amanda. The innocent country gentleman has lost his heart to the bastard baronet—but does he dare lose his reputation too?

Cornell Collins delivers a spirited narration of a charming love story . . . He does an excellent job with the secondary cast as he brings the house party scenes vividly to life. —AudioFile
“I have read some great romance books this year, but this rises to the top. Entertaining, intricately peopled, tightly plotted, and…perfect.” —USA Today

KJ Charles is an editor and RITA-nominated author. She lives in London with her husband, two kids, an out-of-control garden and a cat of absolute night. She writes mostly historical queer romance, some paranormal. Smut, skulduggery, and swashbuckling may occur.