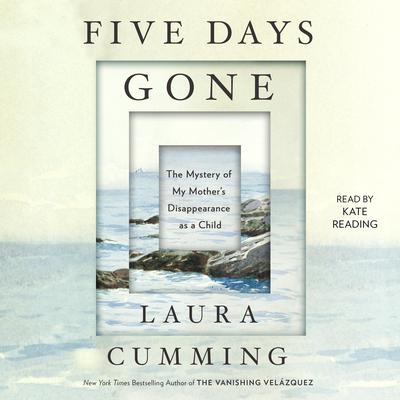 Five Days Gone: The Mystery of My Mother's Disappearance as a Child

Finalist for the 2019 National Book Critics Circle Award in Autobiography

An NPR Best Book of the Year

In the fall of 1929, when Laura Cumming’s mother was three years old, she was kidnapped from a beach on the Lincolnshire coast of England. There were no screams when she was taken, suggesting the culprit was someone familiar to her, and when she turned up again in a nearby village several days later, she was found in perfect health and happiness. No one was ever accused of a crime. The incident quickly faded from her memory, and her parents never discussed it. To the contrary, they deliberately hid it from her, and she did not learn of it for half a century.

This was not the only secret her parents kept from her. For many years, while raising her in draconian isolation and protectiveness, they also hid the fact that she’d been adopted, and that shortly after the kidnapping, her name was changed from Grace to Betty.

“Vivid.” —New Yorker
‘Beautifully written. And at its heart is Cumming’s belief in interpretation as a process of understanding, not just of art but of our lives and actions.” —The Spectator (London)
“A model of how to write a compelling biography of the childhood of an ordinary person. Memoir and biography lovers will be riveted.” —Booklist (starred review)
“Reads like a thriller…Questions and lies abound in this touching book about a daughter’s quest to help her aging mother uncover her true identity.” —Publishers Weekly