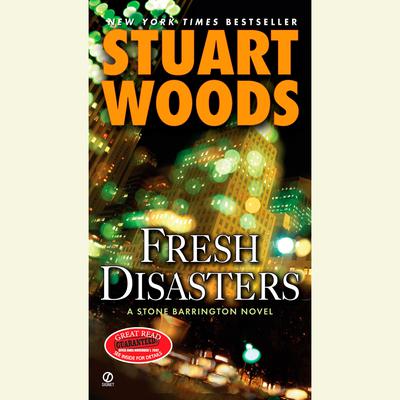 From the New York Times bestselling author A chance encounter with a small-time crook sends Stone Barrington straight into the heart of New York's mafia underworld...

From the New York Times bestselling author A chance encounter with a small-time crook sends Stone Barrington straight into the heart of New York's mafia underworld...

Woods certainly knows how to keep the pages turning. —Booklist
“Since 1981, readers have not been able to get their fill of Stuart Woods’ New York Times bestselling novels of suspense. —Orlando Sentinel
Woods’s Stone Barrington is a guilty pleasure...he’s also an addiction that’s harder to kick than heroin. —Contra Costa Times (California)
“Mr. Woods, like his characters, has an appealing way of making things nice and clear. —The New York Times
A world-class mystery writer...I try to put Woods’s books down and I can’t. —Houston Chronicle
“Stone is as slick as ever. —Booklist
Stuart Woods is a no-nonsense, slam-bang storyteller. —Chicago Tribune
There are plenty of laughs as the pages speed by. Series regulars and newcomers alike will be perfectly satisfied. —Publishers Weekly

Stuart Woods is a New York Times bestselling author. His first novel, Chiefs, the first of the Will Lee novels, won an Edgar Award for Best First Novel and was made into a television miniseries starring Charlton Heston. His other works include the Stone Barrington novels, the Holly Barker novels, the Ed Eagle novels, and a number of standalone works. He has had more than thirty straight New York Times bestsellers on the hardcover list. He was born in Manchester, Georgia, and earned his BA in sociology at the University of Georgia. Aside from being an accomplished novelist, he is also an avid sailor and has sailed in many prestigious races, including the Observer Single-Handed Trans-Atlantic Race (OSTAR) and the Fastnet Race. He wrote an account of his OSTAR race experiences in a memoir called Blue Water, Green Skipper, which was published in 1977.