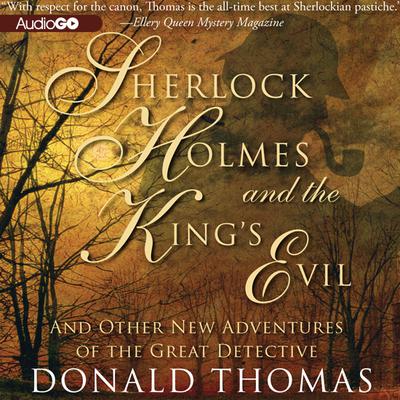 Sherlock Holmes and the King’s Evil: And Other New Adventures of the Great Detective

Here are fivestunning novellas featuring the great detective, by the acknowledged master ofSherlockian pastiche. In these fivetales of intellectual derring-do, Sherlock Holmes is shown at the height of hispowers. He cooperates with a young Winston Churchill in the famed Siege ofSydney Street, helps defeat a plan for a German invasion outlined in theZimmermann Telegram,  establishes a linkbetween two missing lighthouse keepers and the royal treasures of King John,and more. Included are: “TheCase of the Tell-Tale Hands,” “The Case of the King’s Evil,” “The Case of thePortuguese Sonnets,” “The Case of Peter the Painter,” and “The Case of theZimmermann Telegram.”

In these fivetales of intellectual derring-do, Sherlock Holmes is shown at the height of hispowers. He cooperates with a young Winston Churchill in the famed Siege ofSydney Street, helps defeat a plan for a German invasion outlined in theZimmermann Telegram,  establishes a linkbetween two missing lighthouse keepers and the royal treasures of King John,and more.

“With respect for the canon, deep knowledge of Victorian and Edwardian Great Britain, and the writing chops to replicate the Watsonian style, Thomas is the all-time best at Sherlockian pastiche.” —Ellery Queen Mystery Magazine
“Thomas’ fourth pastiche collection conveys the tone and spirit of Conan Doyle’s original tales with nary a false note…This volume reinforces Thomas’ place in the front rank of Doyle imitators.” —Publisher Weekly
“For those who hunger after Holmes…this new collection may fit the bill. Thomas has put together five novellas starring Holmes and Watson…Thomas effectively incorporates the history of the time, the plots twist nicely, and respect is paid to telling minutiae.” —Booklist
“In this new collection of five Sherlockian short stories, the master sleuth is once again at the height of his powers with the aid of his constant companion, Dr. Watson, and, on occasion, Inspector Lestrade…Because Thomas has authored Sherlock Holmes anthologies (The Execution of Sherlock Holmes) and nonfiction books about Victorian-era crime (The Victorian Underworld), it’s hardly surprising that the atmosphere runs true in these stories, which could be mistaken for unpublished Arthur Conan Doyle tales. Recommended for Sherlock Holmes fans and readers who enjoy Victorian mysteries.” —Library Journal
“Prolific Thomas, who’s made a cottage industry of ‘newly discovered’ Holmes cases, presents five tales starring the iconic sleuth…Thomas stretches the frames for Holmes’ cases to historical niches previously unexplored. Though not a great stylist, he’s a meticulous plotter, and the enticing puzzles seem just as long as they need to be.” —Kirkus Reviews
“The cottage publishing market for books extending Arthur Conan Doyle’s Holmes and Watson characters continues with Thomas’ King’s Evil. This series of five novellas offers a concentrated mixture of mystery, history, detailed descriptions, and atmosphere reminiscent of Doyle’s original tales. Narrated by John Telfer, the audio production is basic, with little distinction among characters—the narrator is more of a reader of the text than a performer here. Though it probably won’t satisfy Holmesian purists, Thomas’ work, along with those from other post-Doyle Holmes authors such as Daniel D. Victor and Edward B. Hanna, may interest people who love the characters. Readers fond of Laurie King and other such writers also might like Thomas’ take on these iconic figures.” —Library Journal (audio review)