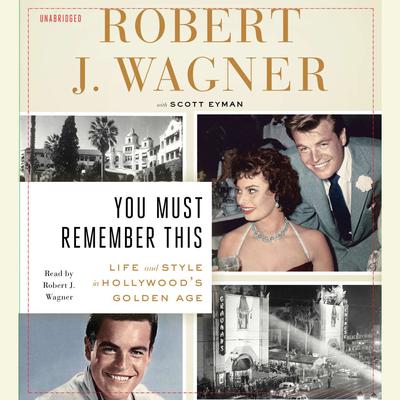 You Must Remember This: Life and Style in Hollywood's Golden Age

A New York Times bestseller and a “charming tribute” (Kirkus) to Hollywood’s most beloved era   Film and television star Robert Wagner has been delighting audiences for more than sixty years, and his many fans flocked to bookstores when he began to record his memories on the page. In his second New York Times bestseller, Wagner shares stories of Hollywood life behind the scenes from the 1930s through the 1950s. As poignant as it is revealing—and filled with magical moments like Judy Garland singing Gershwin at a dinner party thrown by Clifton Webb and golf games with Fred Astaire—You Must Remember This is Wagner’s tender farewell to a legendary era.

A New York Times bestseller and a “charming tribute” (Kirkus) to Hollywood’s most beloved era   Film and television star Robert Wagner has been delighting audiences for more than sixty years, and his many fans flocked to bookstores when he began to record his memories on the page. In his second New York Times bestseller, Wagner shares stories of Hollywood life behind the scenes from the 1930s through the 1950s. As poignant as it is revealing—and filled with magical moments like Judy Garland singing Gershwin at a dinner party thrown by Clifton Webb and golf games with Fred Astaire—You Must Remember This is Wagner’s tender farewell to a legendary era.

“Robert Wagner has written a book about Hollywood that is not a conventional autobiography. You Must Remember This is an octogenarian’s affectionate look back at Tinseltown in its Golden Age. Instead of scandal, this veteran actor delivers fascinating stories about friends including Mary Pickford, Barbara Stanwyck, Jimmy Stewart, and Harold Lloyd, but he also evokes the glamour, excitement, and style of posh restaurants, hotels, and nightspots of that time and place. Well-turned stories about days of glory now gone.” —Barnes&Noble.com, editorial review
“With great affection and a twinkle in his eye, veteran actor Wagner recalls Hollywood’s glory days of the 1940s and early 1950s, when class, manners, friendship, and a code of values ruled the city of stars. Although Wagner regales readers with tales of many of his Hollywood friends—from Mary Pickford and Harold Lloyd to Andy Williams and Jimmy Stewart—he never stoops to kiss-and-tell gossip about the stars nor does he wax nostalgic about a past for which he desperately longs. An expert storyteller, Wagner entertains with tale of restaurants like the Brown Derby—where the Cobb Salad was invented—the Trocadero, and the Mocambo, where elegance, entertainment, and great food filled a triple bill every night; in their day, restaurateurs such as Mike Romanoff and Dave Chasen were stars as big as Frank Sinatra and Bette Davis. Wagner fondly recalls growing up in a Hollywood where there was still land and space enough for him to have a horse named Sonny, and he looks back warmly on the various hotels and houses that sprang up in Hollywood and Beverly Hills as the area became a magnet for the movies. As he takes us on a trip down memory lane, showing us how deeply Hollywood has changed, he concludes that ‘nothing lasts forever, except the movies.’” —Publishers Weekly
“A handsome young journeyman actor in the 1950s, Wagner observed what were to be the last years of the golden era of Hollywood. The studio system and the old-time moguls were beginning to fade but were still powerful. Stars still displayed their glamorous lifestyle in fashionable clubs and restaurants; gossip columnists like Louella Parsons, Jimmy Fidler, and Hedda Hopper feverishly sought their exclusives. Although Wagner sporadically inserts some of his own experiences in this account, it is not a memoir; rather it is more a social history of that era, divided according to broad topics such as the fabulous Hollywood homes, the nightlife, the memorable personalities, the columnists, and how the stars spent their leisure time…Wagner has had a decades-long career and has certainly been in the ‘thick’ of the lifestyle he describes…[An] insider’s view that Wagner provides may well appeal to nostalgia buffs, and he does offer the occasional illuminating insight on that long-vanished time.” —Library Journal
“The story of a place and a time: Hollywood from the 1930s through the ’60s. Divided into topical chapters, including “Houses and Hotels,” “Style,” and “Nightlife,” the book follows Hollywood from its early days (until Cecil B. DeMille arrived in 1913, Hollywood was just another place outside Los Angeles), through its heady decades as the trendsetter in style and popular culture, and ending with the collapse of the studio system, when profits were in steep decline and many of the Golden Age stars were dying or aging out of the spotlight. You can tell that Wagner, whose acting career started when the Golden Age was its most golden, truly misses that time and place; his fondness for it and his distaste for the modern way of moviemaking come through on almost every page. For Wagner, the emblems of Hollywood at its grandest—the mansions, the stars, the parties, the watering holes—evoke a better world, and his account of how it was then just may leave nostalgic readers similarly affected.” —Booklist
“The star of such films and TV shows as A Kiss before Dying and It Takes a Thief revisits the architecture, fashion, restaurants, and pastimes of Hollywood’s golden age through anecdotes and personal memories…Wagner presents a brisk account of early Los Angeles and Beverly Hills, their surrounding neighborhoods, and the silver screen notables who frequented them…Ultimately, the book is a charmed and mostly charming tribute to off-screen lives during a period many may regard as Hollywood’s finest. A diverting ancillary note to heavier biographies.” —Kirkus Reviews
“An entirely enjoyable listening experience! Actor Robert Wagner provides both a rich history of Hollywood’s bygone era—its style, architecture, haberdashery, and ethics—and a personal memoir. While each of Wagner’s eighty-four years may be heard in his weathered voice, his enthusiasm and class are palpable. Hollywood’s Golden Era is accurately compared and contrasted with the bizarre, security-focused nature of today’s celebrity. Though a few mispronunciations should have been caught in production, Wagner’s consistent delivery whisks listeners from the Bel-Air Country Club to the Polo Lounge and the personal homes of the Zanucks and the Warners. The whole package is as effervescent as a glass of Veuve Cliquot, and listeners may want to toast an era never to come again.” —AudioFile

Robert J. Wagner has been active in Hollywood for more than five decades and has starred in such films as A Kiss before Dying, The Longest Day, The Pink Panther, and the Austin Powers movies. On television, Wagner also starred in three long-running series: It Takes a Thief (with Fred Astaire), Switch (with Eddie Albert and Sharon Gless), and Hart to Hart (with Stefanie Powers). He is currently featured on Two and a Half Men. Wagner is married to actress Jill St. John and lives in Los Angeles.

Scott Eyman is the author or coauthor of fifteen books, including the New York Times bestsellers John Wayne and (with actor Robert Wagner), Pieces of My Heart and You Must Remember This. He was formerly the literary critic at the Palm Beach Post and now writes book reviews for the Wall Street Journal and contributes articles for the New York Times, the Washington Post, and the Chicago Tribune.