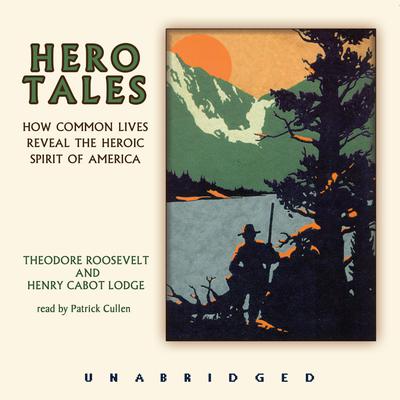 In 1895, two young men destined to make their mark on American life, Theodore Roosevelt and Henry Cabot Lodge, discovered they shared a common interest in the remarkable way ordinary Americans demonstrated the real character of the young nation. They were convinced that the brilliance of American liberty could best be found in the lives of everyday heroes.

These two men researched and wrote the twenty-six inspiring stories in Hero Tales. From great battles of the War for Independence to the intrepid explorations that opened up the western frontier, from the struggles of the early pioneers to the tragedies of the Civil War, these stories capture the essence of the American spirit.

Especially moving is the last chapter, on Abraham Lincoln, in which narrator Patrick Cullen reads Walt Whitman's poem for Lincoln, "O Captain, My Captain," as well as two of Lincoln's speeches, the Gettysburg Address and the Second Inaugural Address.

“Intended to inspire the American people to embrace those moral qualities…indispensable to the good health and survival of a nation.” —Paul M. Rego, author of American Ideal: Theodore Roosevelt’s Search for American Individualism

Theodore Roosevelt (1858–1919) was the twenty-sixth president of the United States. He is noted for his exuberant personality, range of interests and achievements, leadership of the Progressive movement, and “cowboy” image. He was a leader of the Republican Party and founder of the short-lived Progressive Party of 1912. Before becoming president, he held offices at the municipal, state, and federal level of government. Roosevelt’s achievements as a naturalist, explorer, hunter, author, and soldier are as much a part of his fame as any office he held as a politician.

Henry Cabot Lodge (1850–1924) was a Republican senator and historian from Massachusetts. He is best known for his positions on foreign policy, especially his battle with President Woodrow Wilson in 1919 over the Treaty of Versailles. He graduated from Harvard College and was the first student to graduate Harvard University with a PhD in political science. Lodge was elected a fellow of the American Academy of Arts and Sciences in 1878 and served in the Massachusetts House of Representatives from 1880–1881; he also represented his home state in the United States House of Representatives from 1887–1893 and in the Senate from 1893–1924. He is the author of a number of historical works, including Alexander Hamilton, Hero Tales from American History, Theodore Roosevelt, and many others.