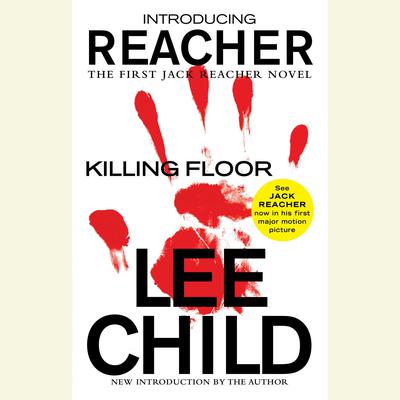 Jack Reacher visits a town without pity in the first novel in Lee Child’s New York Times bestselling series. Ex-military policeman Jack Reacher is a drifter. He’s just passing through Margrave, Georgia, and in less than an hour, he’s arrested for murder. Not much of a welcome. All Reacher knows is that he didn’t kill anybody. At least not here. Not lately. But he doesn’t stand a chance of convincing anyone. Not in Margrave, Georgia. Not a chance in hell.

Ex-military policeman Jack Reacher is a drifter. He’s just passing through Margrave, Georgia, and in less than an hour, he’s arrested for murder. Not much of a welcome. All Reacher knows is that he didn’t kill anybody. At least not here. Not lately. But he doesn’t stand a chance of convincing anyone. Not in Margrave, Georgia. Not a chance in hell.

A big, rangy plot, menace as palpable as a ticking bomb, and enough battered corpses to make an undertaker grin. —Kirkus Reviews (starred review)
Beautifully detailed action scenes and fascinating arcana about currency and counterfeiting…[A] taut and tough-minded first novel. —Publishers Weekly
I love the larger-than-life hero, Jack Reacher. I grew up a fan of John Wayne’s and Clint Eastwood’s movies, and it’s great to see a man of their stature back in business. Lee Child grabs you with the first line and never loosens his grip. Killing Floor is a terrific ride. —Nevada Barr
This is a kick-ass first novel by the very talented Lee Child. Hero Jack Reacher has presence and dimension—a man you definitely want on your side. Child has a sure touch and a strong voice. Definitely a talent to watch. —Lynn S. Hightower
Some novelists can write top-notch action and some can create compelling mysteries, yet it’s rare to find both of those skills displayed in a single book. Lee Child’s Killing Floor is one of them. But not content with writing a rip-roaring thriller, Child also gives us one of the truly memorable tough-guy heroes in recent fiction: Jack Reacher. —Jeffery Deaver
Violent and visceral…A cut above…Reacher is as tough as he is resourceful. An exciting, edge-of-the-chair account. Compelling and relentlessly suspenseful. —The Denver Post
Combines high suspense with almost nonstop action. Reacher is a wonderfully epic hero: tough, taciturn, yet vulnerable. —People
Great style and careful plotting. The violence is brutal… depicted with the kind of detail that builds dread and suspense. —The New York Times
A complex thriller with layer upon layer of mystery and violence and intrigue…A long unsettling trip that leaves your brain buzzing and your stomach knotted. The author pens nightmarish images as casually as an ordinary writer would dot an ‘i’ or cross a ‘t’. —The Philadelphia Inquirer
A tough, compelling thriller with characters who jump off the page. —Houston Chronicle
All [Jack Reacher novels] are ripping yarns, but.... Killing Floor wins awards for Best Corrupt Southern Town in a Summer Novel and Best Exploding Warehouse. —Stephen King, Entertainment Weekly

Lee Child is one of the world’s leading thriller writers. His books consistently achieve the number-one slot on bestseller lists around the world and have sold over one hundred million copies. It is said one of his novels featuring his hero Jack Reacher is sold somewhere in the world every nine seconds. Two blockbusting Jack Reacher movies have been made so far, based on his novels. He is the recipient of many awards, including the CWA’s Diamond Dagger for a writer of an outstanding body of crime fiction, the International Thriller Writers’ ThrillerMaster, and the Theakstons Old Peculier Outstanding Contribution to Crime Fiction Award. He was born in England and now lives in New York.