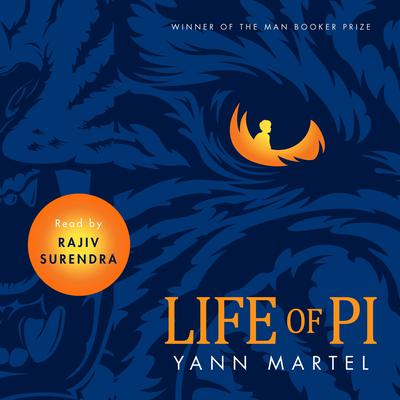 WINNER OF THE MAN BOOKER PRIZE One boy. One boat. One tiger.      After the tragic sinking of a cargo ship, a solitary lifeboat remains bobbing on the wild, blue Pacific. The only survivors from the wreck are a sixteen-year-old boy named Pi, a hyena, a zebra (with a broken leg), a female orangutan--and a 450-pound Royal Bengal tiger. The scene is set for one of the most extraordinary and beloved works of fiction in recent years.

WINNER OF THE MAN BOOKER PRIZE One boy. One boat. One tiger.      After the tragic sinking of a cargo ship, a solitary lifeboat remains bobbing on the wild, blue Pacific. The only survivors from the wreck are a sixteen-year-old boy named Pi, a hyena, a zebra (with a broken leg), a female orangutan--and a 450-pound Royal Bengal tiger. The scene is set for one of the most extraordinary and beloved works of fiction in recent years.

I guarantee that you will not be able to put this book down. It is a realistic, gripping story of survival at sea. On one level, the book is a suspenseful adventure story, a demonstration of how extreme need alters a man’s character…. On another level, this is a profound meditation on the role of religion in human life and the nature of animals, wild and human. His language…is vivid and striking. His imagination if powerful, his range enormous, his capacity for persuasion almost limitless. I predict that Yann Martel will develop into one of Canada’s great writers. —The Hamilton Spectator
“[M]artel’s writing is so original you might think he wants you to read as if, like a perfect snowflake, no other book had ever had this form…. In Pi one gleans that faith — one of the most ephemeral emotions, yet crucial whenever life is one the line — is rooted in the will to live. In any event, when Pi does come to the end of his journey, he has it. —National Post
[A]stounding and beautiful…The book is a pleasure not only for the subtleties of its philosophy but also for its ingenious and surprising story. Martel is a confident, heartfelt artist, and his imagination is cared for in a writing style that is both unmistakable and marvelously reserved. The ending of Life of Pi…is a show of such sophisticated genius that I could scarcely keep my eyes in my head as I read it. —The Vancouver Sun
"A fabulous romp through an imagination by turns ecstatic, cunning, despairing and resilient, this novel is an impressive achievement -- "a story that will make you believe in God," as one character says.... This richly patterned work, Martel's second novel, won Canada's 2001 Hugh MacLennan Prize for Fiction . In it, Martel displays the clever voice and tremendous storytelling skills of an emerging master.FYI: Booksellers would be wise to advise readers to browse through Martel's introductory note. His captivating honesty about the genesis of his story is almost worth the price of the book itself. —Publisher's Weekly
“[Life of Pi] has a buoyant, exotic, insistence reminiscent of Edgar Allen Poe’s most Gothic fiction…Oddities abound and the storytelling is first-rate. Yann Martel has written a novel full of grisly reality, outlandish plot, inventive setting and thought-provoking questions about the value and purpose of fiction. This novel should float. —The Edmonton Journal
A good story can make you see, understand and believe, and Martel is a very good storyteller. Martel displays an impresive knowledge of language, history, religion and literature, and his writing is filled with details and insights. —The Canadian Press
“In the end, Life of Pi may not, as its teller promises, persuade readers to believe in God, but it makes a fine argument for the divinity of good art. —Noel Rieder, The Gazette (Montreal)
Martel’s latest literary offering, Life of Pi, is an exquisitely crafted tale that could be described as a castaway adventure story cum allegory. —The Gazette (Montreal)
Life of Pi…is about many things — religion, zoology, fear — but most of all, it’s about sheer tenacity. Martel has created a funny, wise and highliy original look at what it means to be human. —Chatelaine
In many ways, Life of Pi is a good old-fashioned boy’s book full of survival, cannibalism, horror, math and zoology. An impressive marriage of The Jungle Book with Lord of the Flies, it’s the harrowing coming of age tale of a boy who survives for over a year in a lifeboat with a zebra, an organgutan, an hyena and a Bengal tiger. —The Montreal Mirror
Yann Martel's Life of Pi (Canongate) is another reminder of the largely unsung excellence of the Canongate list. The fiercely independent Scottish outfit remains an outpost of rare quality and distinction, and this exceptional understated novel is certainly a worthy addition to its output.... It would not be out of place on a Booker shortlist. —From The Bookseller

Yann Martel was born in Spain in 1963. After majoring in philosophy, he worked odd jobs and traveled before turning to writing at the age of twenty-six. He is the author of the internationally acclaimed 2002 Man Booker Prize–winning bestseller, Life of Pi.  He currently lives in Saskatchewan, Canada.