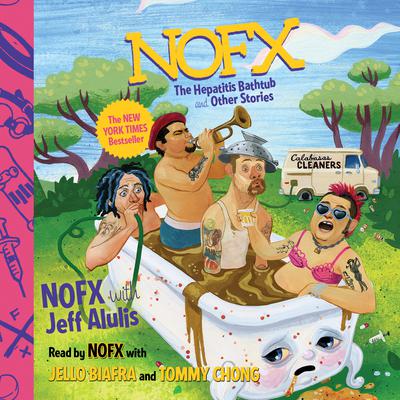 NOFX: The Hepatitis Bathtub and Other Stories

NOFX: The Hepatitis Bathtub and Other Stories is the first tell-all autobiography from one of the world’s most influential and controversial punk bands. Alongside hilarious anecdotes about pranks and drunkenness and teenage failures—featuring the trademark NOFX sense of humor—the book also shares the ugliness and horror the band members experienced on the road to becoming DIY millionaires. Fans and non-fans alike will be shocked by stories of murder, suicide, addiction, counterfeiting, riots, bondage, terminal illness, the Yakuza, and pee … lots and lots of pee. Told by each of the band members (and two former members), NOFX looks back at more than thirty years of comedy, tragedy, and completely inexplicable success.

NOFX: The Hepatitis Bathtub and Other Stories is the first tell-all autobiography from one of the world’s most influential and controversial punk bands. Alongside hilarious anecdotes about pranks and drunkenness and teenage failures—featuring the trademark NOFX sense of humor—the book also shares the ugliness and horror the band members experienced on the road to becoming DIY millionaires. Fans and non-fans alike will be shocked by stories of murder, suicide, addiction, counterfeiting, riots, bondage, terminal illness, the Yakuza, and pee … lots and lots of pee. Told by each of the band members (and two former members), NOFX looks back at more than thirty years of comedy, tragedy, and completely inexplicable success.

“I can say with certainty I’ve never read a rock biography with such balanced elements of sensation and sincerity. Like the few great band bios, the array of experiences described in The Hepatitis Bathtub are enough to set anyone into contemplation about strength and perseverance, love and depravity, camaraderie, and a place for misfit rock and rollers in a society that to this day clings to rigid standards. A must-read for punks new and old and an eye-opening read for all new-comers.” —John Cameron Mitchell, Hedwig and the Angry Inch
“Fat Mike is a rarity in music, an unadulterated authentic. In a profession filled with phonies and withholders, Mike shines as someone who always lets his freak flag fly. I like that a lot.” —Jane Wiedlin, the Go-Go’s
“NOFX and Fat Mike are amongst the most powerful influences of my genre. This book is a ‘must own’ for anyone who still cherishes what is left of punk and rock ’n’ roll.” —Joan Jett
“Not for the faint of heart, and therefore highly recommended to everybody.” —Amanda Palmer
“Fucking gnarly. And great!” —Billie Joe Armstrong, Green Day
“What can I say? There are not enough real punk bands left in this world we live in. If you need a little history lesson on how all this shit started, and what the true meaning of being punk rock is, I suggest you read this book now! Insanely funny, disturbingly honest, and delivered straight from the heart, this book just makes me like NOFX even more than I already do!! Read it now fuckers!!” —Fletcher Dragge, Pennywise
“Compiled in the style of Mötley Crüe’s The Dirt, this readable and engaging account of a band who live life almost as fast as the music they play is predictably rip-roaring…For being a book that spares nothing, this one is hard to beat.” —Classic Rock
“NOFX have been through a lot during their long history as a band. Like, really: a lot. Their new book, The Hepatitis Bathtub, and Other Stories, details it all and does so in true, painfully honest NOFX fashion…The band held nothing back.” —Alternative Press Magazine
“An in-depth look at the seedier underbelly of rock ’n’ roll bastard stepson know as punk rock…Definitely not for the faint of heart. The book and its writers pull no punches as they are both candid and real as they can be…Even if you have never heard of the band NOFX or its members, do yourself a favor and grab a copy of this book!” —Media Mikes
“A definitive history of NOFX. No attempt is made to cover or smooth out any rough or hard memories, everything feels as though it has been included in the name of telling the whole story…The character of each band member is meticulously presented and articulated and, after one has made it through the whole book, readers are left feeling as though they truly know them…In a world where many rock bios seek to do little more than collect myths, NOFX: The Hepatitis Bathtub, and Other Stories bravely stands and tells the great, unbelievable truth.” —Ground Control Magazine
“The first opportunity for fans to hear NOFX’s stories from their own perspective…A welcome look into the history of a band that once went as far as shutting out all press opportunities and interviews…Shines a whole new light on a band that’s been around for longer than many other punk rockers have even been alive. While some stories are what their diehard fans will expect them to be, much of the book will shock even those who have followed the band for thirty years.” —OC Weekly
“Does a great job of putting some of the biggest moments for NOFX into the larger context of punk and the rise of bands like Green Day and Bad Religion… NOFX: The Hepatitis Bathtub, and Other Stories ultimately is a tale of a band’s sheer will to exist and its unlikely success.” —A.V. Club
“NOFX: The Hepatitis Bathtub, and Other Stories may be the most filthy literature you’ll ever read…A must-read for any fan of punk rock, even if you hate NOFX.” —For the Love of Punk
“The Hepatitis Bathtub, and Other Stories doesn’t disappoint. Some of these stories will make you laugh out loud, others will make you cringe and there may have even been a couple of tears at some point…It dives headfirst into the history of the band. And yes, it gets as crazy as you’d expect it to…The Hepatitis Bathtub is not just for the fans though. It’s a story about perseverance. About chasing your dreams. About having the odds stacked against you but succeeding nonetheless. About underdogs that end up at the top.” —Punk Rock Theory
“Every bit as hilarious, disgusting and boundary-hyphen free as you’d expect from a band who’ve spent three decades in the punk trenches filling themselves with drugs and booze.” —Kerrang!
“With often unflinching honestly, NOFX have recounted a harrowing story that showcases the real life pain behind the band’s often obnoxious façade. It makes for a compelling read, and provides a unique fly-on-the-wall look at one of punk rock’s most unlikely success stories.” —Bad Feeling Magazine

NOFX formed in 1983 and has since released over a dozen albums, sold more than eight million records, toured forty-two countries on six continents, founded one of the most successful indie labels in the world, and starred in their own reality television show. They are based in California.

Jeff Alulis is a writer, filmmaker, and musician living and working in Los Angeles.