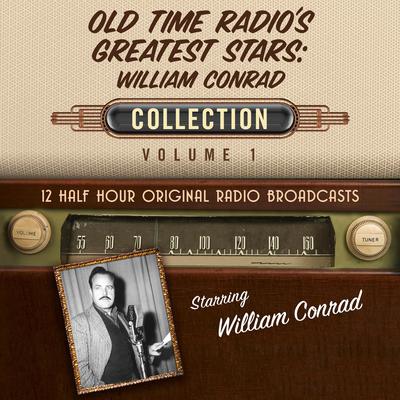 By Black Eye Entertainment
Read by a Full Cast

Versatile actor William Conrad had a long career (1945-1993) and was an American World War II fighter pilot, actor, producer, and director whose career spanned five decades in radio, film and television. He appeared in nearly 8,000 radio shows during the golden age and when TV beckoned, he delivered, starring in Cannon (1971-76), Nero Wolfe (1981) and Jake and the Fat Man (1987-1992). He also narrated the television adventures of Rocky and Bullwinkle (1959-1964) and The Fugitive (1963-1967). He starred in numerous films, including the The Killers (1946), Body and Soul (1947), Sorry, Wrong Number (1948), Joan of Arc (1948) and The Naked Jungle (1954). His most popular role on radio was United States Marshal Matt Dillon on the long-running adult western series Gunsmoke (1952-1961). He voiced starring and supporting roles on most of the west-coast’s dramatic radio programs, including Suspense, Escape, The Whistler, Night Beat, The Lux Radio Theatre and Philip Marlowe. We’ve carefully selected 12 of William Conrad’s finest radio performances for this exciting collection and we hope you enjoy it!