Enter the promo code located on the back of the card

Your code has been applied 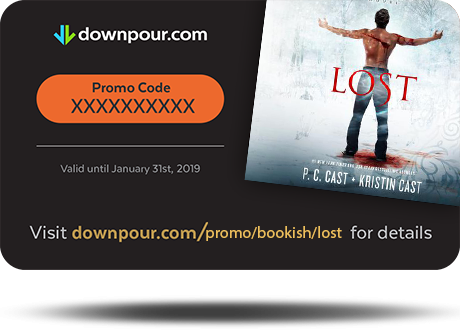 1. Apply your code
Enter the code located on your card and click the "Apply Promo Code" button.

3. Checkout
Your code will automatically be applied to your cart. Click the "Checkout" button from the cart and you will be all set to begin listening. Note: If you don't have a login you will need to create one.

4. Start Listening
Listen instantly through the Downpour app for iPhone or Android. You can also stream content online or download files directly to your computer.

“Mother and daughter remain as dynamic a duo as ever in this follow-up to Loved. Readers will be thrust into a wild ride that is full of magic and suspense.” —Barnes & Noble Press Blog

A #1 Amazon.com Bestseller in Kindle

An Audible Pick of Most Anticipated Listens for Spring

The moment Other Kevin returns to his world trouble begins. Thankfully, he finds friends and allies—some expected, some unexpected—and soon discovers he, like his sister, can wield Old Magick. But without a mentor to help him, will Kevin be tempted to embrace Darkness?

Back in our Tulsa, things have settled down since Zoey and the gang closed the tear between worlds. A new school year has begun, and Zoey’s exchange student program with public schools is really taking off. All is well.

But if all is well, why is Zoey increasingly withdrawn and moody?

Stark thinks he knows what’s wrong—and he is determined not to lose Zoey to the Other World and Heath, who is there and very much alive. Stevie Rae thinks she knows what’s wrong—Z just needs a break. Maybe a little vacay? And the rest of the Nerd Herd thinks their Z will be fine—just give her some time to stop missing (and worrying about) Other Kevin.

But Zoey knows the truth. In the Other World her brother is using Old Magick, unaware of the dangers it holds. Without guidance, what will stop him from giving in to the potent pull of Old Magick? Without her guidance, Other Kevin could lose more than the war against Neferet—he could lose his soul. And Z knows she must help him—after all, he is her little brother …

In Lost, we follow Zoey, Stevie Rae, and Rephaim to an alternative version of the House of Night, where dangers take the form of friends, and allies are found in the strangest places.