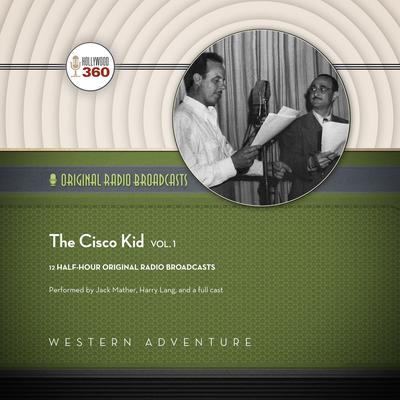 A Hollywood 360  collection
Performed by Jack Mather , Harry Lang , and  a full cast

Enjoy twelve half-hour episodes of the Western adventures of the Cisco Kid and his sidekick Pancho from the popular radio series of the 1940s and ’50s.

The Cisco Kid was a popular film, radio, television, and comic-book series based on the fictional Western character created by O. Henry in his short story, “The Caballero’s Way,” published in 1907 in the collection Heart of the West. Films and television depicted the Cisco Kid as a heroic Mexican caballero, a more honorable character than in O. Henry’s original story.

The Cisco Kid came to radio October 2, 1942, with Jackson Beck in the title role and Louis Sorin as Pancho. It was followed by another Mutual series in 1946, starring Jack Mather and Harry Lang, who continued to head the cast in the syndicated radio series of more than 600 episodes.

The radio episodes ended with one or the other of them making a corny joke about the adventure they had just completed. They would laugh, saying, “Oh, Pancho!” “Oh, Cisco!” before galloping off, while laughing.

Hollywood 360 is a syndicated radio show heard every Saturday evening on radio stations throughout the United States. Hollywood 360 showcases a wide variety of audio entertainment, from the golden age of Hollywood to today’s most current headlines.