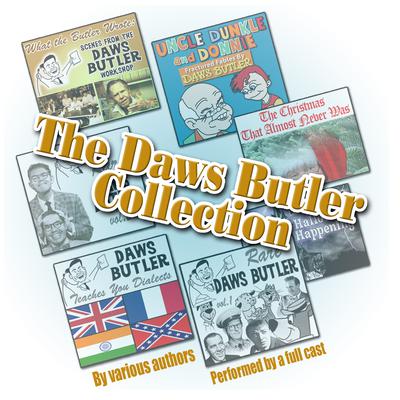 A new production of the classic radio play, this ghostly story was originally written and performed by Daws Butler. Veteran voice actor Joe Bevilacqua teams up with Lorie Kellogg in this new recording, complete with music and sound effects.

Scenes from the Daws Butler Workshop

In this series, Joe Bevilacqua presents performances of several scripts Butler wrote for his 1975 acting workshops.

Uncle Dunkle and Donnie by Daws Butler and Joe Bevilacqua

A collection of imaginative cartoon scripts, this series of thirty-five fables were created by Butler in the 1960s. Here his prot├®g├®, Joe Bevilacqua, performs all ninety-seven characters with music and sound effects.

The Christmas That Almost Never Was by Daws Butler

It is Christmas Eve at the North Pole when Santa Claus loses his "remembery" and only a child who has been good for 365 days can save Christmas! Written and performed by Butler, this  children's radio play was recorded in the 1940s.

Daws Butler was the master of voice. His was the voice behind most of the classic Hanna-Barbera characters: Yogi Bear, Huckleberry Hound, Quickdraw McGraw, Elroy Jetson, and a hundred others. He also originated the vocal character of Cap’n Crunch and other famous Jay Ward cartoon characters. His significant work with Stan Freberg in the 1950s on The Stan Freberg Show and multimillion-selling records such as “St. George and the Dragonet” are still held in reverence today. He also ran a voice acting workshop for many years. Among his many successful students are Nancy Cartwright, the voice of Bart Simpson, and Corey Burton, from Closet Cases of the Nerd Kind.

Joe Bevilacqua, also known as Joe Bev, is a public radio producer and radio theater dramatist. However, his career has taken him into every aspect of show business, including stage, film, and television as a producer, director, writer, author, actor, journalist, documentarian, and even cartoonist. He is also a member of the Metropolitan Opera Company in New York City.

Pedro Pablo Sacristán was born in Madrid and graduated with an MBA from a prestigious business school. His passion for education and writing led him to create Bedtime Stories, short stories that help teach kids values.