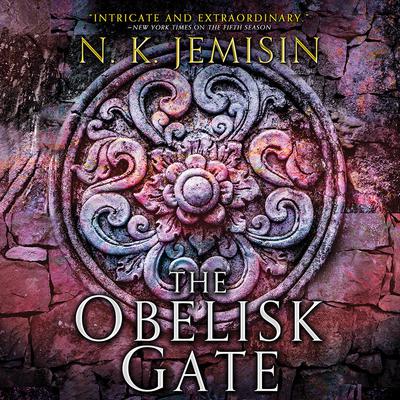 Essun's missing daughter grows more powerful every day, and her choices may destroy the world in this "magnificent" Hugo Award winner and NYT Notable Book. (NPR) The season of endings grows darker, as civilization fades into the long cold night. Essun -- once Damaya, once Syenite, now avenger -- has found shelter, but not her daughter. Instead there is Alabaster Tenring, destroyer of the world, with a request. But if Essun does what he asks, it would seal the fate of the Stillness forever. Far away, her daughter Nassun is growing in power -- and her choices will break the world. N. K. Jemisin's award winning trilogy continues in the sequel to The Fifth Season.

Winner of the 2017 Hugo Award for Best Novel

Nominated for the 2016 Nebula Award for Best Novel

Finalist for the 2017 World Fantasy Award for Best Novel

One of Kirkus Reviews’ Best Books of 2016

Essun's missing daughter grows more powerful every day, and her choices may destroy the world in this "magnificent" Hugo Award winner and NYT Notable Book. (NPR) The season of endings grows darker, as civilization fades into the long cold night. Essun -- once Damaya, once Syenite, now avenger -- has found shelter, but not her daughter. Instead there is Alabaster Tenring, destroyer of the world, with a request. But if Essun does what he asks, it would seal the fate of the Stillness forever. Far away, her daughter Nassun is growing in power -- and her choices will break the world. N. K. Jemisin's award winning trilogy continues in the sequel to The Fifth Season.

Jemisin might just be the best world builder out there right now.... [She] is a master at what she does. —RT Book Reviews (Top Pick!) on The Fifth Season
A must-buy...breaks uncharted ground. —Library Journal (starred review) on The Fifth Season
Jemisin's graceful prose and gritty setting provide the perfect backdrop for this fascinating tale of determined characters fighting to save a doomed world. —Publishers Weekly (Starred Review) on The Fifth Season
Astounding... Jemisin maintains a gripping voice and an emotional core that not only carries the story through its complicated setting, but sets things up for even more staggering revelations to come. —NPR Books on The Fifth Season
[A] powerful, epic novel of discovery, pain, and heartbreak. —SFF World on The Fifth Season
This is an intense, exciting novel, where survival is always on the line, set in a fascinating, original and dangerous world with an intriguing mystery at the heart of it. I can't wait to see what happens in the next book! —Martha Wells on The Fifth Season
Heartbreaking, wholly unexpected, and technically virtuosic, The Fifth Season is a tour-de-force. I felt every shock--and the book is packed with them--in my marrow. It's no exaggeration to say that Jemisin expands the range of what great fantasy can be. —Brian Staveley, author of The Emperor's Blades
With every new work, Jemisin's ability to build worlds and break hearts only grows. —Kirkus (starred review)
One of the most celebrated new voices in epic fantasy. —Salon.com
Stunning and well constructed ... a book that imbues itself with deeper meaning the more it unfolds and reveals itself, and by the end, I saw everything in a new light. I knew Jemisin was talented, being a huge fan of her Inheritance and Dreamblood books, but here she employs heretofore unseen skills. —Lightspeed on The Fifth Season
[The Fifth Season is] an ambitious book, with a shifting point of view, and a protagonist whose full complexity doesn't become apparent till toward the end ... Jemisin's work itself is part of a slow but definite change in sci-fi and fantasy. —Guardian on The Fifth Season
Intricate and extraordinary. —New York Times on The Fifth Season
Jemisin builds off of the strong foundation laid in The Fifth Season ... an interesting new series. —Booklist on The Obelisk Gate
Beyond the meticulous pacing, the thorough character work, and the staggering ambition and revelations of the narration, Jemisin is telling a story of our present, our failures, our actions in the face of repeated trauma, our responses to the heat and pressure of our times. Her accomplishment in this series is tremendous. It pole-vaults over the expectations I had for what epic fantasy should be and stands in magnificent testimony to what it could be. —NPR on The Obelisk Gate
Jemisin is now a pillar of speculative fiction, breathtakingly imaginative and narratively bold. —Entertainment Weekly
“Robin Miles continues as narrator, and the large cast of characters allows her to draw on her vast store of accents. Her narration is intimate and engaged, and she enriches the complicated relationships…Miles draws out the emotions—sometimes volatile, sometimes seething beneath the surface—as the complexities of this postapocalyptic world unfold. Winner of the AudioFile Earphones Award.” —AudioFile
Exceptional. —Library Journal (starred review) on The Obelisk Gate
Stunning, again. —Kirkus (starred review) on The Obelisk Gate
Brilliant characters, vivid world, and pacing . . . .The Obelisk Gate is an incredibly ambitious and important novel. —The Verge on The Obelisk Gate
Jemisin is a tremendously talented writer on every level and she's at the top of her game here. I love books that beat me up and take my lunch money, and this one left me bruised, breathless, and desperate for the final volume. —Rose Fox, senior reviews editor Publishers Weekly, (PW Staff Picks: The Best Books We Read in 2016) on The Obelisk Gate
Stunning.... Jemisin's most accomplished series yet. —RT Book Reviews on The Obelisk Gate
[How] can something as large and complex as this story exist in her head, and how does she manage to tell it to me so beautifully? I can't stand how much I love The Broken Earth trilogy so far.... Absolutely dazzling. —B&N Reviews on The Obelisk Gate
“In this compelling, challenging, and utterly gripping work that combines elements of fantasy, science fiction, and horror…Jemisin immerses readers in a complex and intricate world of warring powers, tangled morals, and twisting motivations.” —Publishers Weekly (starred review)

An alien mystery you won't forget

This author only gets better with every single book she writes. I don't know how she could keep the mystery of the story so engaging, even as she reveals truths and peels away the layers. At the end we feel that there is much more to learn. It is utterly fascinating that she could deftly and intricately create characters that probably would be two-dimensional and laughable at the hands of another writer. The stone eaters are such a fascinating concept that I both want to see this series be turned into a movie, and yet I'm disgusted at the thought because how could anyone do what Jemisin has done here with her words. The concept of death weaves its way throughout all of this novel and her previous novels, and it is shocking how she accepts the violent deaths of others in a way that most stories I've read shies away from. That bravery is part of what keeps me reading, because really nothing is taboo in these stories. We find that underneath all the death is actually a story about life, and its endurance, and perhaps the true meaning of what we are and how our souls abide in this universe.

N. K. Jemisin is an American author who has won three consecutive Hugo Awards for Best Novel. Her work has also won the Nebula, Locus, and Goodreads Choice awards. She is a reviewer for the New York Times Book Review, and she has been an instructor for the Clarion and Clarion West writing workshops.