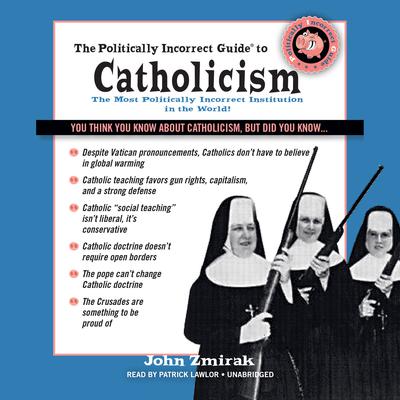 The Politically Incorrect Guide to Catholicism

A brand-new installment in the beloved Politically Incorrect Guides!

The Politically Incorrect Guide to Catholicism is an honest look at the Catholic Church, including history and present controversies, from the author of the Bad Catholic’s Guides.

Back by popular demand, the bestselling Politically Incorrect Guides provide an unvarnished, unapologetic overview of controversial topics every American should understand. The Politically Incorrect Guide to Catholicism refutes misrepresentations and misconceptions about the Catholic Church and separates rumor from truth when it comes to Catholic traditions, faith, and controversial leaders.

“John Zmirak is so brilliant, effervescent, and indefatigably entertaining that I’m much too embarrassed to mention it publicly.” —Eric Metaxas, New York Times bestselling author
“A wry combination of the hilarious and the profound: truth delivered with razor wit. As a result, it is compulsively readable.” —Robert Reilly, author of The Closing of the Muslim Mind
“An entertaining and enlightening book that will help you to think about Catholicism in ways you may not expect.” —Gerald E. Murray, JCD, pastor, Holy Family Church, New York
“The Politically Incorrect Guide to Catholicism should serve as a vital textbook in classrooms of Catholic colleges—though of course, it probably won’t!” —Jason Scott Jones, producer, Crescendo

John Zmirak is an editor, college teacher, screenwriter, and political columnist. He is author of the popular Bad Catholic’s Guides, Wilhelm Röpke, and The Race to Save Our Century. His essays, poems, and other works have appeared in the Atlanta Journal-Constitution, USA Today, the American Conservative, Modern Age, and Commonweal, among others. He edited a number of popular guides to higher education and served as press secretary to Louisiana governor Mike Foster.