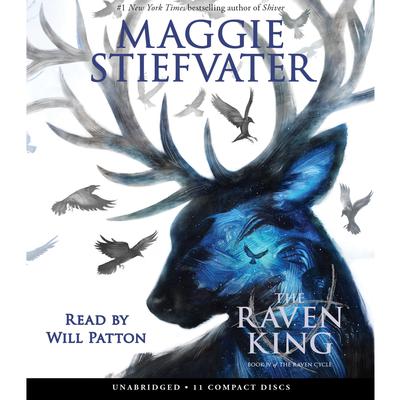 By Maggie Stiefvater
Read by Will Patton

AUDIO - TRADE EDITION NARRATOR: Will Patton FORMAT: 11 CDs, Unabridged All her life, Blue has been warned that she will cause her true love's death. She doesn't believe in true love and never thought this would be a problem, but as her life becomes caught up in the strange and sinister world of the Raven Boys, she's not so sure anymore.

A Publishers Weekly Best Book of 2016

All her life, Blue has been warned that she will cause her true love's death. She doesn't believe in true love and never thought this would be a problem, but as her life becomes caught up in the strange and sinister world of the Raven Boys, she's not so sure anymore.

“Patton perfectly captures each character’s voice and personality, maintaining the consistency of the series. He’s a master at creating suspense, conveying action, and helping the listener feel the full weight of love and sorrow…This don’t-miss performance rounds out an excellent young adult series with crossover appeal to older listeners. Winner of the AudioFile Earphones Award.” —AudioFile
“The playful, imaginative force of Stiefvater’s writing works its magic once again, and most readers will finish this saga not with regret or disappointment but with hope.” —Publishers Weekly (starred review)
“Indeed, this is a book that fulfills both prophecies and reader expectations.” —Bulletin of the Center for Children’s Books (starred review)
“Beyond the imaginative storytelling, the colorful cast of characters, and the looping subplots, Stiefvater has tackled big questions about life and death, power and personal responsibility, dreams and promises, and fate and destiny. Verdict: This is a series that is destined for greatness and The Raven King is a crowning achievement. —School Library Journal (starred review)
“Everything is exactly right: the writing is gorgeous, the characters are brilliantly realized, the compelling plot arises organically from them, the mounting danger and suspense leaves the reader breathless, and the presence of evil is palpable…Stiefvater’s Raven Cycle is magic, plain and simple.” —Booklist (starred review)
“Stiefvater’s exploration of character-driven themes that young adults experience in their own lives provokes a visceral reading experience that is enhanced by the magic and mythology surrounding the series.” —VOYA
“Readers of Stiefvater’s Raven Cycle—of which there are many—will greet this final chapter with fanfare and sadness. Bidding farewell to Blue, Gansey and the amazing world Stiefvater’s created is no easy task. The many threads she’s fashioned over the past three books continue to weave together and apart, to then merge in new and surprising ways. The prose is such that you’ll be dog-earing pages to mark perfectly rendered passages for further examination. An excellent ending to a fantastic—and fantastical—series.” —RT Book Reviews (4½ stars, Top Pick!)

Maggie Stiefvater is the #1 New York Times bestselling author of The Scorpio Races and the Wolves of Mercy Falls trilogy. She is also the author of Lament and Ballad.