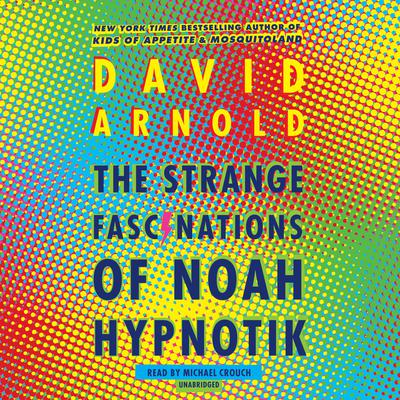 The Strange Fascinations of Noah Hypnotik

“An epic wonder”* from the bestselling author of Mosquitoland   This is Noah Oakman → sixteen, Bowie believer, concise historian, disillusioned swimmer, son, brother, friend.   Then Noah → gets hypnotized.   Now Noah → sees changes—inexplicable scars, odd behaviors, rewritten histories—in all those around him. All except his Strange Fascinations . . .    A stunning surrealist portrait, The Strange Fascinations of Noah Hypnotik is a story about all the ways we hurt our friends without knowing it, and all the ways they stick around to save us.     *Adam Silvera, bestselling author of More Happy Than Not and They Both Die at the End

“An epic wonder”* from the bestselling author of Mosquitoland

Then Noah → gets hypnotized.

Now Noah → sees changes—inexplicable scars, odd behaviors, rewritten histories—in all those around him. All except his Strange Fascinations . . .

A stunning surrealist portrait, The Strange Fascinations of Noah Hypnotik is a story about all the ways we hurt our friends without knowing it, and all the ways they stick around to save us.


*Adam Silvera, bestselling author of More Happy Than Not and They Both Die at the End

“An epic wonder.” —Adam Silvera, author of More Happy Than Not
Boom! That's the sound of your mind exploding when you listen to this audiobook. —AudioFile, Earphones Award Winner
An incredible, eye-opening read . . . Arnold’s characters shine in their realistic relationships and in their relatable fears and shortcomings. Be ready for a game changer of a novel—and a lot of reflection. —Romantic Times
Arnold’s hipster wit and wickedly clever plotting make for an absorbing, stylized romp . . . Holden Caulfield’s reluctance to grow up mixes with Andrew Smith’s sharp-eyed, sharp-tongued narrators to create a character altogether Arnold’s own. —BCCB
"Compelling. —Kirkus Reviews"Singular and brainy and deeply intriguing, with an ending that devastates . . . The book’s shattering payoff takes a primary rule of storytelling and busts through it like Kool-Aid Man, and the results are electrifying.
— A Barnes & Noble Best Book of 2018 — A Teen Vogue Best Book for Teens 2018 — A Vox Best Book of 2018 — A BookPage Best Book of 2018 — A Chicago Public Library Best Book of 2018  — A Booklist Best Fiction for Young Adults 2019 — A YALSA Best Fiction for Young Adults 2019  —
Whip-smart dialogue, fun pop-culture asides, endlessly endearing and fully realized characters and a hypnotic mystery... —BookPage
★ "Arnold has written an in-your-face validation of the power of real and honest friendship, guaranteed to mesmerize readers and leave them altered. —Booklist, starred review ★ "This is a comedic coming-of-age tale with plenty of pop culture and literary references and the snarky, casual, and observational feel of a mumblecore comedy. Supporting characters are fully fleshed out and hilarious. A weird, compelling teen-angst trip that will appeal to fans of John Corey Whaley.
The Strange Fascinations of Noah Hypnotik is an epic wonder that only David Arnold could have dreamed up. You'll marvel at every glowing page as powerhouse Arnold tells a blazing, transporting story of love and history and mystery and more. —Adam Silvera, New York Times bestselling author of More Happy Than Not and They Both Die at the End
As he did in his fantastic debut Mosquitoland, David Arnold again shows a knack for getting into the mind of an eccentric teenager in clever, poignant fashion . . . An artfully crafted tale about a boy finding his groove amid the cacophony of adolescence. —USA Today
“Narrator Michael Crouch moves from Noah’s mellow, thoughtful musings to a louder, assertive voice on the fateful night that Noah gets drunk and is hypnotized—the night that everything changes. With Crouch as guide, listeners inhabit the mind and moods of this introspective teen as he recounts his surreal experiences in tones of disbelief, panic, humor, and resolve. Equally well done are Alan—upbeat, funny, and gay (literally and figuratively); Val—iconoclastic, dry, and insightful; and the lovable Penny—who has quirks and an obsession of her own. Winner of the AudioFile Earphones Award.” —AudioFile
An unpredictable, Vonnegut-esque examination of identity, friendship, and forgiveness . . . Unique and surprisingly poignant. —Chicago Tribune
Shivery and vaguely psychedelic . . . This is the kind of book that will appeal strongly to teenagers like Noah who are just starting to think about what they want from their futures, but it’s also immensely enjoyable to read as an adult. It’s a funny, eerie, beautifully textured book, a strange fascination in and of itself. —Vox
A surreal, memorable examination of how our relationships can both hurt and ultimately save us. —Teen Vogue
Don't just pick this one up for its brilliantly bright cover. This book is equal parts odd, imaginative, and insightful. —BuzzFeed
"A breathtaking, mind-bending tour de force that probes fate and forgiveness, history of the human connection, and what it means to live. Ambitious, wise, hilarious, and yearning, The Strange Fascinations of Noah Hypnotik is David Arnold at his exuberant best. —Kelly Loy Gilbert, author of Picture Us in the Light and Morris Award finalist Conviction

David Arnold is theauthor of several books, including Kids of Appetite and Mosquitoland. His books have been translated into over a dozen languages.