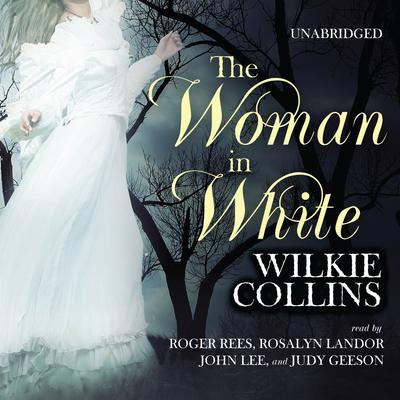 The Woman in White

When Walter Hartright encounters a solitary, terrified, beautiful woman dressed in white on a moonlit night in London, he feels impelled to solve the mystery of her distress. Full of secrets, locked rooms, lost memories, and surprise revelations, The Woman in White features heroine Marian Halcombe and drawing-master Walter Hartright as sleuthing partners pitted against the diabolical Count Fosco and Sir Percival Glyde. This gothic psychological thriller, a mesmerizing tale of murder, intrigue, madness, and mistaken identity, has gripped the imaginations of readers since its first publication in 1860. The breathtaking tension of Collins’ narrative created a new literary genre of suspense fiction, which profoundly shaped the course of English popular writing.

Winner of the Audie Award for Best Classic Narration

When Walter Hartright encounters a solitary, terrified, beautiful woman dressed in white on a moonlit night in London, he feels impelled to solve the mystery of her distress. Full of secrets, locked rooms, lost memories, and surprise revelations, The Woman in White features heroine Marian Halcombe and drawing-master Walter Hartright as sleuthing partners pitted against the diabolical Count Fosco and Sir Percival Glyde.

This gothic psychological thriller, a mesmerizing tale of murder, intrigue, madness, and mistaken identity, has gripped the imaginations of readers since its first publication in 1860. The breathtaking tension of Collins’ narrative created a new literary genre of suspense fiction, which profoundly shaped the course of English popular writing.

“The Woman in White has lasted, to our great pleasure, because it is superb storytelling about people who engage our minds and our imaginations.” —Anne Perry, New York Times bestselling author
“Collins was a master craftsman, whom many modern mystery-mongers might imitate to their profit.”  —Dorothy L. Sayers, New York Times bestselling author
“[A] genuine classic…and, a rare thing among mystery stories, wonderful to reread.” — Independent on Sunday (London)
“A wonderfully mysterious novel. It is large and sweeping, with skillfully drawn characters, lovely passages, and absolutely haunting scenes, a fully formed nineteenth-century novel with all the trimmings.” —Publishers Weekly
“Both fans and newcomers to this classic suspense novel will enjoy the narrators’ light British accents. The actors use varied vocal rhythms and patterns to distinguish educated upper-class characters from those lower on the pecking order. Especially effective are the convincing (and sometimes hilariously accented) voice of sinister Fosco; the stilted, sighing tones of hypochondriac patriarch Frederick Fairlie; and the sure, confident sounds of Marian Halcombe.” —Booklist (audio review)
“Since Collins tells the story through a series of individual narratives, the publisher chose a talented cast of actors to deliver the various points of view. Roger Rees portrays Laura’s brave friend, Walter Hartright, with the feeling and candor so evident in his personality. Equally compelling is Rosalyn Landor’s depiction of Marian Halcombe in a rational but genuine tone. All the actors give much attention to the various dialects and foreign accents as they embody the array of characters. The production not only draws the listener into the thrilling mystery but also offers a lot of fun along the way.” —AudioFile

"...[E]xpressions of incredulity and surprise..."

Those words describe the reactions of a lawyer as, midway through the novel, he hears the details of a conspiracy to rob a woman not only of her fortune but her legal existence. I use them here because The Woman in White is one of the few books that have been able to wring the same involuntary expressions from me as well.

This is a gripping story wrapped around a tantalizing mystery--a mystery made more tantalizing because, like our hero and heroine, all your guesses at its solution are so wide of the mark. The plot is insanely improbably and yet unerringly true to life. The villainy is believable because it comes upon you as real villainy does, in stages and by half-intuitions. The virtue is so admirable because its practitioners are always honest about their own inner struggles to be virtuous. We are spared scenes of extravagant Victorian grief in the interests of keeping the story going. Not only are the characters fully rounded, but the story is too, due to the “experiment” (Collins’ own word) of telling the tale from many different vantage points.

And if all that isn’t enough, we get musings such as this, from a drawing master reflecting on his summer’s task of teaching two young ladies how to sketch from nature:

“At any time, and under any circumstances of human interest, is it not strange to see how little real hold the objects of the natural world amid which we live can gain on our hearts and minds? We go to Nature for comfort in trouble, and sympathy in joy, only in books. Admiration of those beauties of the inanimate world, which modern poetry so largely and so eloquently describes, is not, even in the best of us, one of the original instincts of our nature. As children, we none of us possess it. No uninstructed man or woman possesses it. Those whose lives are most exclusively passed amid the ever-changing wonders of sea and land are also those who are most universally insensible to every aspect of Nature not directly associated with the human interest of their calling. Our capacity of appreciating the beauties of the earth we live on is, in truth, one of the civilised accomplishments which we all learn as an Art; and, more, that very capacity is rarely practised by any of us except when our minds are most indolent and most unoccupied. How much share have the attractions of Nature ever had in the pleasurable or painful interests and emotions of ourselves or our friends? What space do they ever occupy in the thousand little narratives of personal experience which pass every day by word of mouth from one of us to the other? All that our minds can compass, all that our hearts can learn, can be accomplished with equal certainty, equal profit, and equal satisfaction to ourselves, in the poorest as in the richest prospect that the face of the earth can show. There is surely a reason for this want of inborn sympathy between the creature and the creation around it, a reason which may perhaps be found in the widely-differing destinies of man and his earthly sphere. The grandest mountain prospect that the eye can range over is appointed to annihilation. The smallest human interest that the pure heart can feel is appointed to immortality.”

For someone like me, who can never remember the names of flowers and who’d rather spend the weekend inside Rheims Cathedral than on top of Mount Rainier, the above effusion may be nothing more than a large dose of validation. Nevertheless, it is darn good.

But wait, there’s more: A fine cast delivers all the different perspective that give us our story, chief among them Roger Rees who sustains the lion’s share of the narration as our hero, Walter Hartright. His pitch-perfect performance illuminates the character he plays as much as the story he tells.

And it is a hum dinger of a story. I remember reading somewhere that Collins had expressed the hope that his tombstone would simply read, “I wrote The Woman in White”. Now I understand why.

Reviews don't do this one justice. This full cast version is Amazing! Each narration adds a new depth to the story. I had never considered reading this classic, until I heard a sample of it's multi-narrator production.
This one definately deserves more credit!
It's not just a classic!

A brilliant and important piece of literature

Infinitely better than that two-bit hack, Dickens. Collins left out just one important detail---the inscription on Frederick Fairlie's tombstone: "I told you I was sick!"

Wilkie Collins (1824–1889) studied law and was admitted to the bar but never practiced. Instead, he devoted his time to writing and is best known for his novels The Woman in White, No Name, Armadale, and The Moonstone, which has been called the finest detective story ever written. A number of his works were collaborations with his close friend, Charles Dickens. The Woman in White so gripped the imagination of the world that Wilkie Collins had his own tombstone inscribed: “Author of The Woman in White.”